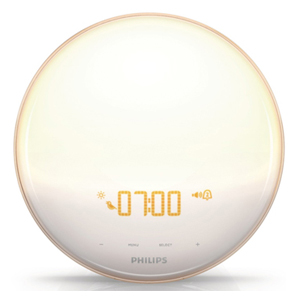 Dawn simulators are great. In my business, a cheap, harmless option is great. They’re better than a placebo, but if you don’t think it does anything for mood you might still like it.  Wouldn’t you rather wake up to a gradual dawn and a room full of light than a jangling alarm in a dark room followed by the sudden arrival of mid-morning?

Okay, there is a risk.  If you have a bed-partner and she or he arises after your wake-up time, you’re gonna have trouble. She can get a stylish eye mask though?

Short answer: it’s a gizmo that every morning gradually turns on a bedside lamp while you’re asleep, simulating dawn. This tricks your brain into thinking that it’s August so don’t it doesn’t do that winter slow-down thing.

Long answer: see Start with a Dawn Simulator on my Light Therapy page.

I don’t have a seasonal mood problem, I just like waking up in the light, and thereby avoiding that moment of turning the room from dark to full light when you’re still half-asleep. I’ve used the timer-only approach, which allows you to use your current bedside lamp.I bought it as a demo’ and have just kept using it this way, now about 18 years later (I moved to the Pacific Northwest 20 years ago…).

The light/timer combinations save space on your bedside table though. I’ve put my favorite options below but there are others. Some come with radios, security timers so that the light goes on and off when you’re out of town, beepers to back up the light in case it doesn’t wake you, automatic dimming at night, snooze switches, and nightlight settings to which it switches after a set interval at night. (The nightlight thing: very bad idea. It works against what you’re trying to achieve here. If you need a nightlight at night, you need an amber one. That’s another story). PS my basic rig is still working 12 years later…

To keep it simple, there are only four models you need to consider.

2. You need cheap but you also want to use your lamp for reading. Buy the Lighten UP Model 308 for $40 plus shipping.

3. You want the timer and lamp together? Here’s one: it’s more expensive than the above but it had bird song alarms and it looks cool — Philips Wake-Up).

Start using it in the fall when at your regular wake-up time (you do have a regular wake-up time, don’t you? You’ve noticed it’s a common ingredient in nearly all the bipolar-specific psychotherapies?) your room is not filled with sunshine anymore. Keep using it until the following spring when the sun is “ahead” of your dawn simulator, giving your room more light sooner than your little light.

Set it so that the light wakes you up at the time your alarm clock usually would. This takes several nights to figure out. Most of these units are set so that they reach peak intensity (all the way “on”) at a particular time you can set on the clock. The light starts going on long before that, gradually. On some units, you can specify how long this will take; on some it is fixed, at 30 or 45 minutes. Either way, you want to keep adjusting the “on” time until the light is waking you up just when you would like to wake up — neither earlier nor later. Got that? It took me about a week to get it right. If you have bipolar disorder, start by having it wake you up “too late”, with a back-up alarm clock to actually get you up. In other words, if you have bipolar disorder, you don’t want to give yourself automatic sleep deprivation by waking up too early with this thing. Some people are very sensitive to light and will wake up when the light has only just begun to start its cycle, so err on the side of having it wake you up to light when you start figuring this all out.

How Will I Know If It’s Working?

This gizmo has two effects: it wakes you up, and for some people it will also have an effect on mood. The wake-you-up part should be pretty obvious! As for mood, some people notice an effect within about 3-4 days, but to be sure it’s “not going to work”, you should have at least two weeks of regular waking to the light at the right time. Since this thing can’t hurt you, as far as we know, you might even want to give it 4 weeks before turning it off and selling it to a friend. (I have been telling patients “if you buy one and it doesn’t work, bring it in and I’ll buy it from you, I need a demonstration unit” for several years. I still don’t have one. So either folks don’t buy them; or everybody benefits from them; or everyone finds a friend or buyer who’ll take it off their hands!)

If it does “work”, your mood should be better. Granted, that’s not a very solid measure. How are you supposed to know? If you have doubts, you can wait to see if people who know you well comment on how you look or act (if they comment before you ask, you know it’s for real). If no such comments come along, and you’re still in doubt, you can wait to see your doctor and see what she thinks, listening to you. But you know, we’re looking for a pretty blockbuster response here. A dawn simulator may not get you well (that would be great, and it can do that for some people — “remission”) but it ought to do something pretty obvious. There should be little doubt in your mind that it’s worth having the thing wake you up, even on weekends!

How Long Do I Use It?

That’s right, you have to keep doing this on weekends too, all through the winter. Remember, the idea is to trick your brain into thinking it’s still July. You can’t just have a few days of December show up every week. Your brain will know. “Trying to trick me, eh? Ah, I’ll show you then.” You can stop using it when the morning sun is waking you up before the dawn simulator does. Pretty obvious, huh? And start it up again when, in the following fall, you’re starting to find it dim or dark in your bedroom when you wake up. Get started early; there is reason to think you can “get behind” trying to keep your brain in July, so don’t let that morning darkness establish itself before you dig out your dawn simulator. Good luck!

One of my patients, when I was trying to explain dawn simulators, said “there must be an app’ for that”. Sure enough, he surfed it up while I was ordering his lab tests.  Search “dawn simulator” on your phone.

Lichtwecher is the one I found on Android. Seems to work fine: the screen face is bright enough and quite blue, which if anything should make it more effective in this role.