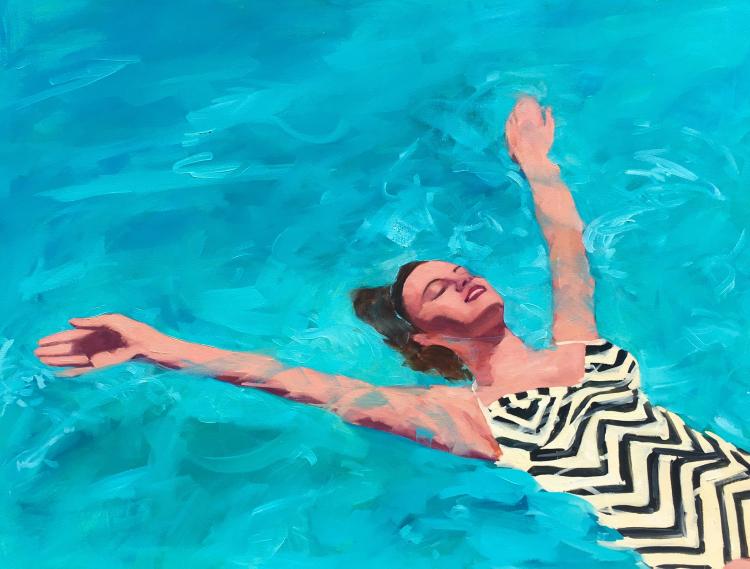 Your eyes are for seeing the world, right? True; but they’re also used for one other thing: allowing your brain to know whether it’s day or night out there! Turns out this is not done with the same parts of your eye you’re using to read these words right now.  Instead there’s a special part of your eye that senses light, just light, to know day from night.  Only one color of light matters to this part of your eye: blue light. Really.

So, if you’re going to be careful with light, as my essay on light and dark in bipolar disorder suggests, your have to be most careful with blue light.

Somewhere along the way you probably learned that your retina, the back of your eyeball, has several different kinds of light receptors. Rods are for night vision, and for motion detection at the edge of your vision, but don’t see color. Three kinds of cones sense different wavelengths of light: red, blue, and green; when your brain puts all those together, you have color vision (unless you’re missing one; then you’re “color blind”).

Ah, but there’s one more light receptor back there on your retina. It was discovered in 2001, but as important is it is — you’ll see — surprisingly few people know about it. I didn’t, until a new tool for depression came along that was built just for this particular light receptor.

This recently discovered receptorBrainard 2001 is there just to tell your brain whether it’s light or dark outside. It can do this even when your eyelids are closed! (Your eyelid is moderately transparent: close your eyes and look at the light in the room where you’re sitting — you can tell when you’re looking toward, or away from that light, right?)

So it’s actually quite old, evolutionarily, a holdover from when eyes where first evolving from a patch of skin that could tell light from dark. (If you have trouble with “evolution”, try my little essay on that, linked from the bottom of this page; for now, read on. I think this story actually makes the evolution thing more believable, at least to me).

Interestingly, this light/dark receptor is tuned to sense only blue light. (Why blue? Probably because it penetrates water better than other colors; more on that). Remember that light includes a spectrum of light colors, from red to dark blue, which you can see if you break it up with a prism.

In the graph below, the spectrum of sunlight is represented by the yellow colored area, from very blue (short wavelength) at the left, to very red (long wavelength) at the right. Our eyes can see all these colors, using the cones. But the wavelength peak with the stripes (“effective bandwidth” in this graph) is the only color the light/dark receptors are watching for.

The light/dark sensors connect to your biological clock, rather than to your vision center. For some more detail on that, see the essay on light and dark in bipolar disorder; and for more on exactly how the biological clock works (how do you make a clock out of proteins?) and how light affects it, see The Biological Clock, Light, and Lithium.

As you probably know, there’s a version of depression called “Seasonal Affective Disorder” (SAD), or “winter depression”. This kind of depression — which is very common in people with Bipolar II — can be treated with light. Plain old light will do, but in some parts of the country in December plain old light is hard to come by (such as where I live, in the winter-rainy/cloudy Willamette Valley of Oregon).

So several decades ago researchers studied whether sitting in front of a bank of lights for 30-60 minutes might help reverse the seasonal sag in mood, and found that indeed some people seemed to respond very well. In the most recent study of “light therapy”, sitting in front of a box of light every morning during a Canadian winter was as effective as fluoxetine (Prozac).

But the light needed for this, from a suitcase-sized light box, was hard to get: insurance companies almost never pay for these boxes, which used to be expensive, usually around $250-300. They are not very portable.

However, now the research-grade light boxes are only about $80-120. That takes a lot of steam out of the story which once was a big deal, namely the little blue light boxes that emerged because of this research on blue light. The blue light boxes now cost nearly as much as the original approach, and are harder to use properly, so there’s little reason anymore to go for a blue one.

The little blue light box has been tested for effectiveness and beats a placebo treatmentGlickman just as the older bigger light boxes have.  But they are not better than the larger research-grade boxes. At best they might be as good. And they’re not as well tested.  So I no longer recommend the little blue boxes.  They had the advantage for a while when their cost was half the larger ones, but that’s no longer the case. More on those boxes, their safety issues, where to get them, and why I like dawn simulators better, on my Light Therapy page.

Blue light is different from all other forms of light, in terms of your body’s understanding of day and night.

If you haven’t just come from there, may I recommend that you have a look at my page on Bipolar Disorder: Light and Darkness, which looks at important treatment implications of the research above. This describes the other important use of blue light: avoiding it at night! That’s part of an interesting idea known informally as Dark Therapy.