A reader just wrote and explained that she was thinking about trying to talk her provider into lurasidone because she was afraid of the rash with lamotrigine. Oh my gosh. Time for a page on lurasidone. I generally do not use new medications for as long as I can stand it. I have yet to write a prescription for lurasidone, as of December 2014. In my opinion, when a new medication comes out, the best thing to do is let everyone else use it for a while until we find out what the problems really are.

However, I’m almost there. A paper was just presented showing no significant weight gain in a year on lurasidone.  In fact, there was some slight loss, but that’s probably because people had been switched to it from similar medications that had already caused a lot of weight gain. Patients on risperidone for a year gained 5 pounds, while those on lurasidone lost 2 pounds.  After the study was over patients had an option to switch to lurasidone.  Those who did lost 5 pounds in the next 6 months. (presented at a European conference, reported in Psychiatric News Dec 2014).

Those data were from a study that was surely sponsored by the manufacturer, so still suspicious, but those numbers are enough for me to start trying this — if everything else that’s affordable hasn’t worked. Lurasidone is going to be far too expensive for anyone facing a 50% copay, as many will, for quite a while yet.

Like quetiapine, lurasidone has quite solid evidence for benefit in the treatment of bipolar depression. As they do with quetiapine, some mood experts would advocate for consideration of lurasidone before something like lamotrigine, because of the data showing lurasidone actually working are quite good compared to lamotrigine. Here.is one of the study results, where you can see lurasidone outperforming placebo by a substantial margin (down is good;
the graph shows amount of change in a standard measure of depression from the beginning of the study ): 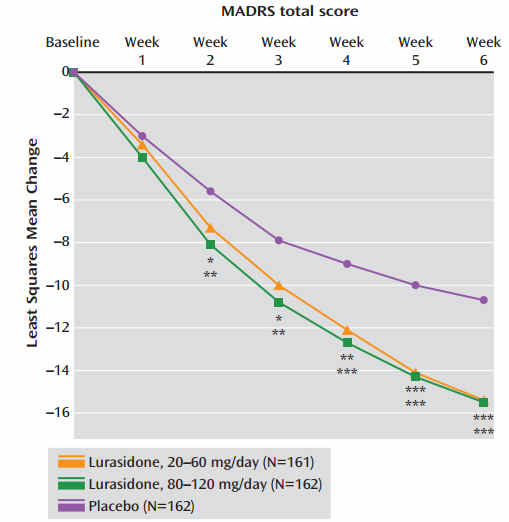 These results earned lurasidone an FDA indication for bipolar depression, and that was followed by approval in children with bipolar depression. When all the studies are tallied, lurasidone has a pretty strong effect (specifically, it’s “Number Needed to Treat” is 4, which means 1 in 4 people respond much better to it than they would to a placebo…. sounds like a small effect but many bipolar treatments are closer to 1 in 10!).

Lurasidone even improved the “third pole” of bipolar disorder – cognitive symptoms. In a small controlled trial they took people with bipolar disorder who had no mood symptoms but lots of cognitive complaints, and gave them either lurasidone or placebo. The lurasidone group were thinking much clearer after 6 weeks, and this is a notable feat as no other antipsychotic has been able to prove that (if anything, they seem to make cognition worse).Yatham

The downside of lurasidone is that it has never treated mania in any study. Now, it’s tempting to think that all antipsychotics treat mania, as most of them do, but we can’t assume that. Invega didn’t. And we’re tempted to think that if lurasidone really worked in mania the manufacturer would have published that.

Also, here’s a hint that it doesn’t. Most antipsychotics treat depression in the small doses and mania in the big doses. Basically, beyond a certain dose they don’t work any greater for depression and start working for mania. Lurasidone is not that way – its antidepressant effects got steadily stronger from the dose of 20 mg/day to 120 mg/day in a secondary analysis of its trials. That suggests to me that the anti-manic effects may not be kicking in within that dose range. On the other hand, it can help depressive mixed states.

Lurasidone also has good evidence in depressive mixed states (aka Major Depression with Mixed Features). In DSM-5, this is a way of recognizing mixed/manic bipolar symptoms in people who don’t meet full criteria for bipolar disorder (it’s a major break in the DSM’s all-or-nothing conceptualization of mood disorders and a step toward the spectrum model). We know that about 1 in 4 people with non-bipolar (“unipolar”) depression have these mixed features, so lurasidone is a reasonable choice here, if there are severe enough.

And severe enough is the key word, because antipsychotics carry many risks, so they shouldn’t be used for mild symptoms.

Lurasidone’s main drawbacks are nausea, restlessness (an uncomfortable feeling in the legs called akathisia), and – with long term use – a risk of potentially permanent muscle twitching called tardive dyskinesia. Like all antipsychotics, it has a risk of weight gain and metabolic problems like diabetes and high triglycerides, but these metabolic risks are notably smaller with lurasidone which is a major plus.

However, compare that to lamotrigine, which has no weight gain and no long-term medical risks. Some would argue that lamotrigine doesn’t work as well, and indeed it clocked in at about half of lurasidone’s antidepressant-potency, but that was based on an analysis of early lamotrigine studies, most of which only tested the medication for 6-7 weeks. Lamotrigine has a slow build, taking 4 weeks just to reach a therapeutic dose and another 4 for that therapeutic effect to kick in, so this isn’t really a fair comparison. Lamotrigine compares more favorably when allowed to show its effects over the long term.

How to Take It

Lurasidone can be taken once a day, morning or night (depending on whether it makes you tired). But there’s one thing of which you must be certain: Take it with a full meal (at least 350 cal). Otherwise, it just doesn’t get in there.

Antidepressants in Bipolar II: What the Experts Do
Mood, Metabolism, and Cognition: An Interview with Rodrigo Mansur
Do Benzos Treat Depression?
150 Things to Try When You’re Depressed