There’s not much question that fish oil is better than a placebo. Until
recently there was a big question about dose, but the review below addresses that. However getting the dose and type right is tricky. Here are the details behind the recommendations. [Update 6/2020: same results from a second similar review, where a lower dose was found effective. See below. ]

My fish stories page has some specific products (to which I have no $$ connections).

How we — and you — know what dose to get

In 2011, a research team at the New York State Psychiatric Institute did some great math.Sublette  Their study is detailed below. It’s the reason for the following strong recommendations, including: “do the math”.

The problem is, it’s really difficult to do the math you need to do in the grocery store when you’re choosing a fish oil.  Most patients have trouble doing this even sitting in my office.

So practice up before you buy fish oil.  You want one that’s:

Because, as best as I can tell, few grocery store or internet fish oils reach the 60% EPA score.  For example, here’s a not-random sample (in order on Amazon as I search fish oil):

Conclusion: sure enough, it’s worth trying to do the math in the grocery store.

Here’s the math you need

The math, in case you need the steps (most people do…):

The next section explains the study that is the reason why you’re doing all this. My fish stories page has some specific products (to which I have no $$ connections) that appear to be among the lowest price ways to reach the right dose and type.

The study that leads to these dose recommendations

The research teamSublette  divided all the fish oil research studies into 2 groups. In the first group, EPA was less than 60% of the total EPA plus DHA in each pill. In the second group, the dose of EPA was 60% or more of that total.

You can see this result graphically below, even if you are not familiar with this type of math. See how all but one “better than placebo” studies are in the black group? The two big diamonds with no bar through them (one each at the bottom of the black and white groups) represent the overall average effect 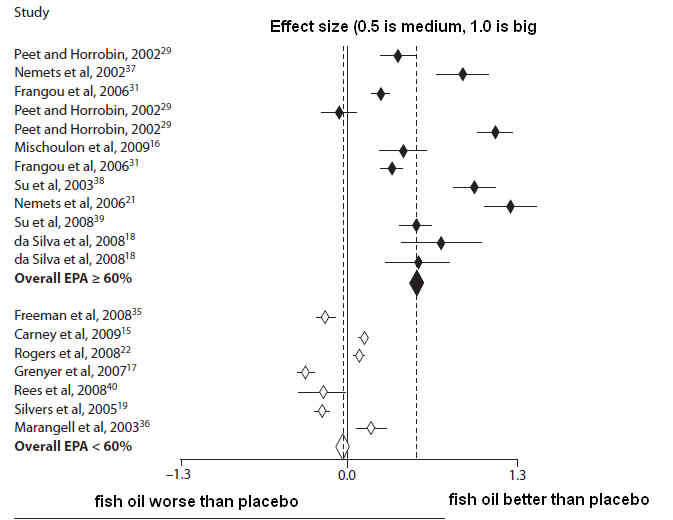 In this kind of graph, effect size means “how much better was the treatment than a placebo?” You can see that the black group is much farther right, on average, than the white group. Far enough to make a difference in real people’s lives? According to these data, yes. In general, a small “effect size” is 0.2 or so. A medium effect size is 0.5. Getting up to 1.0 means the difference between the treatment and a placebo treatment is quite large.

So, see the black diamond, the average: the effect size there is 0.53.
Another similar analysis reached a similar conclusionMartins. And another in 2019 (McIntyre et al; his name is spelled wrong!).