Anxiety, mood and energy, all shifting up and down, sometimes with each other, sometimes one going off without the others:  a total mess, right? Not quite.  The pictures below tell a different story:  skim through those and see if you get it.

The three color pictures on this page are from Drs. Dean Mackinnon and Ron Pies, used with their permission from their article on “affective instability”.Mackinnon This term means, roughly, unstable mood and energy. People with such instability have big changes in their mood, or energy, or creativity over time. They may have easy tearfulness, such as crying over a commercial on TV. They may have extreme episodes of anger, often over a minor event. They can sometimes have inappropriate “mirth” — laughing too loud or too long, or being too giddy or goofy — although, isn’t it interesting, that’s not a problem I hear about much!

Drs. Mackinnon and Pies offered a new explanation for this instability, which I have tried to “translate” in three steps below. Their model is quite different from the current diagnostic system for bipolar disorder.

You see, according to the current official rules of diagnosis (the DSM-5), “mixed states” are still very narrowly defined: multiple manic symptoms and multiple depressive symptoms at the same time.  Other more subtle combinations don’t count.   (If the idea that manic and depressive symptoms can occur together is news to you, better read about Mixed States and return here after that). Similarly, the DSM only recognizes cycles  of 4 days or longer. Any  shorter doesn’t fit on the map.

But patients do have other combinations of depression and hypomania, or mania — not just the two worst phases together. And they do have cycles shorter than 4 days. The DSM can’t really handle these variations, but the model shown here handles them very well. When I show these pictures to my patients, I often see the “light bulb” go on in their head. 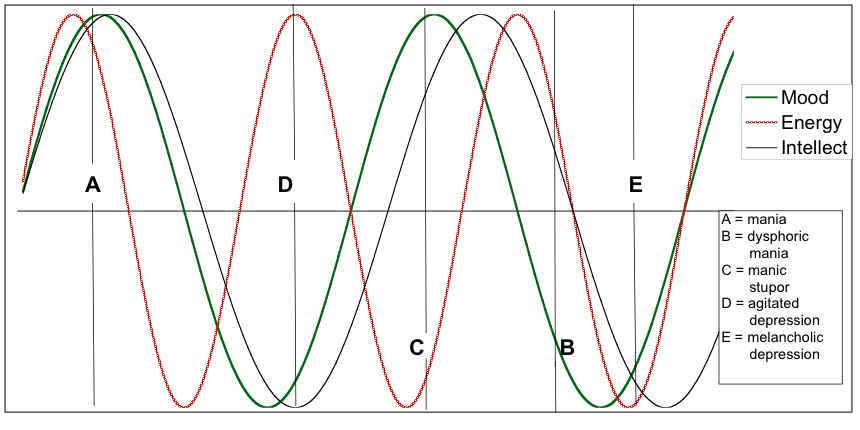 As you can see, if they all go up together — and far enough “up” — this would be what is commonly called a manic or hypomanic episode, as shown at point A on the graph. If they all come down together, far enough, that would be an episode of “major depression”, as shown at point B. But now we can see how “agitated depression” could be part of a bipolar problem, when the energy curve is up while the others are down, as at point D.

Point C represents an unusual combination usually recognized only on inpatient psychiatry units, when a person is agitated yet hardly moves, so-called “manic stupor”. But imagine what a milder version of this would look like: the person would know she needed to get moving, indeed she would be thinking of many things she needed to be doing, and she might really want (in a very powerful way) to be doing them, and yet her body would refuse to go along. She would be lying there on the couch, miserable yet not really depressed, wondering what was wrong with her and why she couldn’t get herself going.

Point B represents another very important combination we psychiatrists see commonly: the energy wave is up, but the mood wave is down (in this case, the timing is such that the intellect wave is up too, but not as high as the energy — yet there are many combinations, as you’ll see in a moment). This could be called “dysphoric mania”: energized, as in a usual manic phase, but mood is very negative.

Now consider the rate at which the different waves vary.

Rapid cycling: 4 per year or 4 per week?

Bipolar disorder is supposed to have phases lasting at least 4 days. Shorter than that, and it doesn’t fit the official model. But the shorter versions are seen so often they have their own names, as shown below. 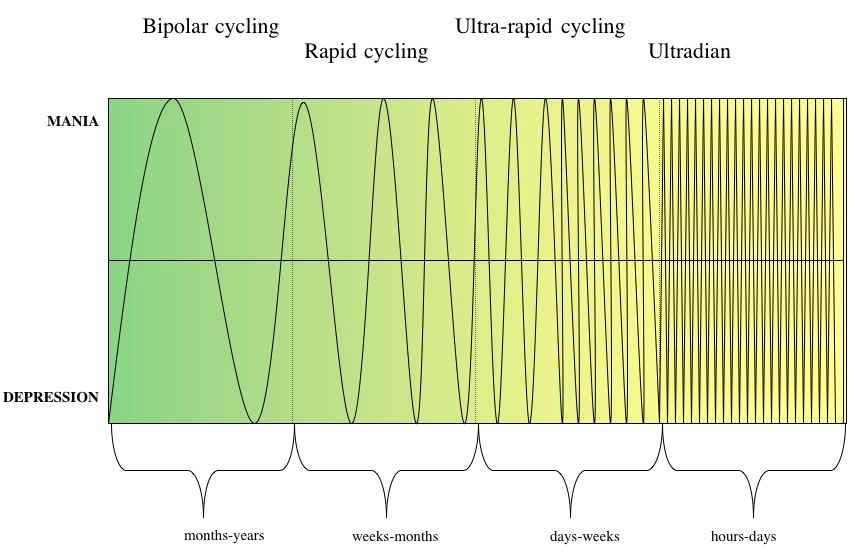 4 per week? sure: here’s a clear case of cycling every other day. Admittedly, when the “cycles” get so short there are multiple moods in a day, the condition gets hard to distinguish from “normal emotions” — normal reactions to events that last a few minutes or even close to an hour or so.  If such rapid emotional shifts are extreme, most psychiatrists start to think of a different diagnosis: borderline personality disorder. But here’s the point: let’s combine the two graphs you’ve just seen to see how mixed states explain common experience of patients with “bipolar” that doesn’t look bi-polar.

Many people with Bipolar II do not have the “well intervals”, in between periods of having symptoms, that are often spoken of in websites and books about Bipolar I. This leaves them somewhat puzzled. Do they really have “bipolar disorder?”   They never really have “episodes”, let alone “manic” episodes.

Yet as the following graph shows, a rapid cycling of the individual symptoms, at different rates, can create a varying pattern of nearly continuous symptoms. Instead of having identifiable “episodes”, this person has almost constantly shifting symptom phases that blend into one another. 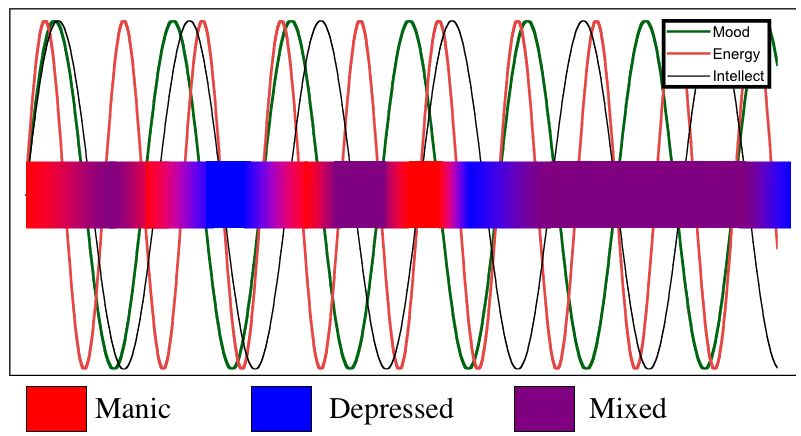 (Drs. Mackinnon and Pies’ article includes numerous other ideas, built around these wave diagrams. One is the relationship between bipolar and borderline diagnoses. More on that…)

When I’ve shown this last graph to patients, many have said “oh, now I see — that’s me!” This doesn’t mean they “have bipolar disorder”. There are other ways to have experiences like the continuous red/blue/purple color bar. Like a miserable life situation that has subtle moments of not quite so miserable. But at least this graph helps explain how “bipolar” can look far from a clear manic-depressive pattern.

One Thought on “Rapid Cycling And Mixed States As “Waves””