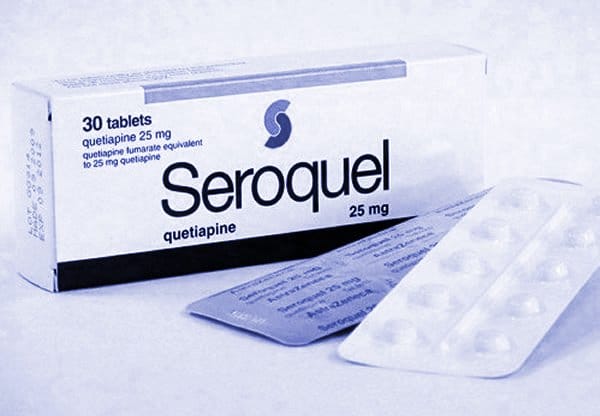 Quetiapine is not like the other “atypical antipsychotics” (olanzapine, risperidone, ziprasidone, aripiprazole):

But it does cause weight gain like all the rest (except ziprasidone, which is too flukey to use much).  With the weight gain comes a risk of blood sugars going up, heading toward and sometimes developing diabetes because taking this medication. Huge problem there.  And it can raise your triglycerides (a blood fat, like cholesterol, linked to heard disease risk).

Man, after all that, you’d think no one would want to take this stuff. But when other things haven’t worked and bipolar depression is severe, it’s great to have another alternative.  And there are some potential antidotes to weight gain, though we can’t really count on them (yet).

One more nearly universal side effect: it really knocks people out at night (maybe a good thing if you’re having really bad insomnia; at least for a while), with a little slowness for 45 minutes in the morning (daytime sedation is a transient side effect while the dose is going up; should only last a few days and is less if you go up slower).

With all that, why is it so often listed as the number one medication for bipolar depression? Even if lamotrigine doesn’t have the data for effectiveness that quetiapine doesn’t, at least it doesn’t do all that.  Even lithium seems to me to be much less risky, if managed right. A top research team in Australia agrees.Berk

Some of the more technical stuff I need to keep at hand follows.

Risperidone can can cause an increase in a hormone called prolactin. This causes some breast enlargement (including in guys), sometimes even milk production; and it can cause irregular menstrual cycles. Risk of osteoporosis goes up.vartej

Quetiapine has been repeatedly shown not to do this, with the exception of two case reports (searched 8/2005) when used with an antidepressant as well.venlafaxine,mirtazapine

Obviously there was some bad in the “good” you’ve heard thus far: quetiapine is associated, at least to some degree, with weight gain; and a risk of developing diabetes.

From that bipolar depression study discussed above, here are common side effects by dose, relative to placebo:

Are there any other long-term risks? People who get a good response to the medication and are likely to stay on it for a long time need to know about tardive dyskinesia, a serious movement problem that can continue even when the medication has stopped. With the new atypical antipsychotics, tardive dyskinesia appears to be a bit less common, but along with weight gain and diabetes, it is one of the big long-term risks of this class of medications.

Quetiapine ought to have lower rates of tardive dyskinesia (because it does not occupy the dopamine receptors as much as the other (2014) but risperidone was worse as this logic would predict.McDonagh

Lastly, the risk of causing or worsening manic symptoms:  as noted above, all antipsychotics have been reported to do this.  For quetiapine, a 2015 review found 13 reported cases. Millard So this really, really unusual, but possible.

Quetiapine is a little more susceptible to interactions with other medications than many other psychiatric medications. Whereas most of our tools require no adjustments when used with other medications, this one requires a little thinking. While so far, we do not have evidence of interactions with most of the medications we use, here are three which matter. Mind you, if one starts out low and goes up slowly on the quetiapine dose, then even if quetiapine levels are doubled by the other medication, this should not be a problem. The patient would simply respond at a dose lower than one would expect. Or, side effects might turn up at lower doses, making the necessary dose increases impossible.

However, in one case below, the opposite occurs: quetiapine levels are lowered so far when the patient is already taking carbamazepine, it would be nearly impossible to get satisfactory quetiapine levels. One would need far more than the average doses to get the usual benefits from this medication.

A recent study indicates that people who are taking valproate (divalproex/Depakote) have much higher quetiapine levels for a given dose: 77% higher.Aichhorn This study was not “prospective”, meaning that they didn’t measure levels on quetiapine alone, then measure them again when combined with valproate. Instead, they just compared levels between patients who were or were not also on valproate. So these data are not “for sure”, but very suggestive that there is a significant interaction between these two medications.

Think of it this way: if you’re also on valproate, you can get your quetiapine much cheaper — with less than half the dose you might otherwise require! Of course the other way around is important too: if you’re on divalproex, you may not require a very high dose of quetiapine and might need to start lower and go up a little more slowly to know where you will get the best result. Note the words “may” and “might” in that sentence, please.

If a patient is already taking this antidepressant, quetiapine levels will be nearly twice as high for a given dose of quetiapine than one would have expected.Castberg

Indeed, the results of this study suggest that using quetiapine in patients already taking carbamazepine may be quite futile. But maybe not entirely: I have at least one patient who’s on both whom I am pretty sure is getting something out of the quetiapine rather as I’d have expected (pro-sleep, antidepressant, antianxiety — and pro-weight gain, pro-diabetes too…).

Antidepressants in Bipolar II: What the Experts Do
Mood, Metabolism, and Cognition: An Interview with Rodrigo Mansur
Do Benzos Treat Depression?
150 Things to Try When You’re Depressed