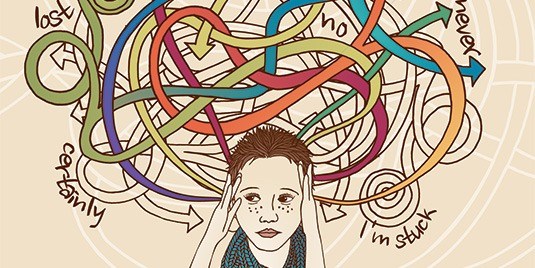 Have you ever worried about something and couldn’t control it? Fretted over how to solve a problem without actually solving it? Or just stewed in self-critical thoughts? Psychologists have a word for this kind of over-thinking: rumination. It’s both a symptom and a cause of depression, meaning it can make depression persist in a vicious cycle.

Rumination is also normal and functional. Self-critical thoughts can help us avoid mistakes. Some of that problem-solving may lead to solutions, and even worry itself can help people prepare for the worst. Ruminative thoughts stem from an area of the brain called the default mode network, which is also involved in self awareness.

Rumination is a habit, and like any habit it can be changed. Doing so can double the chance of recovery from depression. Other conditions that benefit from reducing rumination include anxiety, obsessive-compulsive disorder, and bipolar mania.

The first step to changing a habit is to notice early signs of it. People can ruminate about anything, but some subjects are more likely to trigger it, such as:

Get to know the situations where you are more likely to ruminate, such as:

Think of this as a scavenger hunt. You are trying to find the triggers and situations that bring this habit on.

Now that you’ve identified early signs of rumination you can start to change it. Warning: don’t try to stop ruminating. Telling yourself “I’ve got to stop thinking about my daughter’s problems” only reminds you of those problems. Trying to stop rumination can even cause people to ruminate about rumination (“Why do I waste so much time worrying?”). Countering it with positive thoughts usually leads to “Yea, but…” responses that pull you back in. Instead of trying to stop it, try starting something else.

Engage in the Present Moment

Think of times when you were fully engaged with life, living in the moment. Activities that foster this are a good antidote to rumination, such as:

One activity deserves special note. A study of rumination and brain activity found that walks in nature reduced rumination more than walks in urban or suburban environments.

These two states of mind can override the rumination circuits. Compassion means “Allowing ourselves to be moved by suffering, and experiencing the motivation to relieve it.” Empathy is “The desire to understand and appreciate the mind of another.”

Rumination does not allow us to be moved by suffering; it tries to push suffering away. Rumination often desires to relieve suffering, but it goes about it ways that lead to greater frustration.

Rumination pulls people inward, towards their own problems. Empathy helps people get out of their head and into another’s world. When someone cuts you off on the highway, it’s easy to feel anger when all you see is their car. It’s different when you imagine that the driver’s son is stranded in a dangerous part of town and he’s racing to go help.

Compassion towards others tends to build compassion towards ourselves. Instead of treating yourself like a problem that needs to be solved, try talking to yourself with a warm, supportive, accepting, encouraging voice. Simple phrases like “This too shall pass” or “I’m doing the best I can” are helpful.

Multitasking, rushing, and taking on too much can cause rumination. It makes us feel like we’re not good enough or don’t get anything done. The solution won’t be easy for perfectionists: Give yourself enough time to complete tasks one by one.

Mindfulness is a way of appreciating the present moment with intention and awareness, without overreacting or judging. It happens naturally when we do absorbing activities, and it can also grow with practice. Mindfulness can be learned through therapy, apps (Headspace), audio, and books.

Even when it hurts, there is sometimes a useful purpose in ruminating. You may be able to find healthy substitutes to fulfill the same purpose once you get in touch with what it is. Common uses of rumination include:

Rumination is like an overgrown garden. There are weeds everywhere, but flowers too, and it helps to know the difference. Rumination can be helpful, and here are some signs that it’s on a productive path: