Here is a potential new tool for the treatment of bipolar depression (and a bunch of other addiction-related problems). It beat placebo in bipolar depression in a well-controlled trial.Berk And the stuff is cheap. And it is only one chemical step away from a normal body molecule, although big doses are not “natural.”

What is n-Acetylcysteine (NAC)?

Short Answer: it is just an amino acid — same as the stuff you eat every day, in protein — called cysteine. You’ll find it in beans, lentils, spinach, bananas, salmon and tuna. The N-acetyl business is just to make your gut absorb it better (thus N-acetylcysteine, or NAC).

Cysteine has anti-oxidant effects. That was the first reason it was studied. It also affects a neurotransmitter called glutamate (as does lamotrigine).  In some research studies, it was used for one reason but may have actually worked through the other! At this point, it’s not clear exactly how the stuff is helping, when it does; but it seems clearly more than a placebo.

This simple molecule has been studied and shown to be better than a placebo for the treatment of:

and preliminary evidence (not studied yet against placebo, or in humans) for the following:

NAC has a slow build. The original study in bipolar depression lasted 6 months, and NAC did not truly work until the end of the study when it overtook the placebo. What’s interesting though is that even though it took a long time to work, people felt worse within a week of stopping it in that study.

A few other trials followed up on that finding, but all were negative. So does it really work? Possibly. The negative trials may not have gone long enough – all were less than 5 months. Also, keep in mind that NAC only treated “subsyndromal” or chronic, low-grade depressive symptoms in the first study, not actual depressive episodes. But if you have bipolar II you know that these chronic symptoms really take a toll on life. So it’s worth a shot.Aiken Besides, if you take lithium, NAC is the only thing we know of that might protect the kidneys.

Turning to schizophrenia, we also see that NAC only works for depressive (“negative”) symptoms when taken for 6 months.

How Does it Work?

This gets really complicated, even as summarized briefly below. Skip to How Safe is It? unless you’re really interested!

There are two main mechanisms which have been considered as the basis for NAC’s effects on mood and behavior. First, it increases the availability of antioxidants in the brain, where oxidative damage is thought to be part of the problem with stress. Secondly, it helps with the control of glutamate, a neurotransmitter that can cause trouble at high levels. Those two mechanisms are now explained further. Skip on to Safety unless you’re really interested!

My text below will help you get ready for the essay in which this diagram is central: 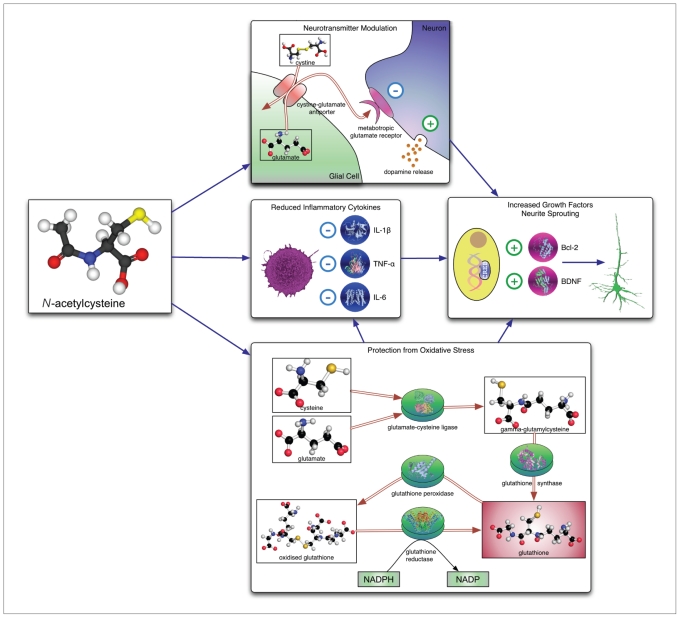 Mechanism 1. Cysteine is an important ingredient, the limiting one in fact, for the creation of glutathione. Glutathione is an anti-oxidant”, one of the primary ones. These molecules clean up chemical debris in cells, to oversimplify quite a bit. Research suggests that people with depression have too little glutathione. Using NAC is really just a way to try to raise the glutathione levels.

Glutathione (GSH, L-gamma-glutamyl-L-cysteinylglycine) is the predominant anti-oxidant in the cytoplasm of cells. Virtually all cells require glutathione for viability and function. Glutathione is synthesized from three amino acids in a two-step process, beginning with the combination of glutamic acid & cysteine and ending with the addition of glycine. The liver & lungs are the primary sites of glutathione synthesis. Glycine & glutamic acid are plentiful in cells, so it is the availability of cysteine that controls the reaction rate.

Mechanism 2. Another amino acid, glutamate, acts as a neurotransmitter (serotonin is another neurotransmitter you are probably more familiar with). Too much glutamate activity is not good, and that may be part of the problem in mood and anxiety disorders. Well, it turns out that cysteine can lower the amount of glutamate stimulation getting through to some neurons. It does so through a close relationship with glutamate, in in which it affects the balance between the two amino acids in brain neurons (I know, that was really vague. But this “co-transport” story is even more complicated, and I cannot really explain it well, yet). Changing cysteine levels can change this cysteine/glutamate balance — to the good, it appears, for people with mood and anxiety problems.

Mechanism #2 is starting to look to me like the important one. If you’re prepared for even more detail , see the thorough review (12/2010), including that diagram, by Drs. Dean and Burk and colleagues.

How Safe is It?

A review of safety issues was recently published (2009). Bottom line: oral acetylcysteine looks pretty safe when used in the doses studied for mood and compulsive behaviors. If you also use Viagra (sildenafil or one of its cousins), or coumadin, or nitroglycerin, then read the Nitro and NAC page (important).

Nothing is completely safe, of course. There are “rare” cases of severe allergic reactions with the oral approach used here, but no deaths (how rare? not clear, but looks extremely rare). However, it may affect blood coagulation. If you’re taking it, make sure to tell your doctor, especially any surgeon or anesthesiologist heading in your direction.

In reading the 2009 reference above, it’s really hard to sort out oral from intravenous NAC, but it sure looks like nearly all the trouble occurred with the IV form. That means we’re still a bit in the dark regarding safety of the oral form, as the focus has been on the IV form for years.

Long-term use. A 6 month study in diabetes reported no concerns about long-term risk.Martina NAC has also been used as ongoing treatment for cystic fibrosis. One study looked specifically at the safety of using 2.8 grams per day for 12 weeks; no major concerns emerged in this research.Dauletbayev 2009 Of course a much longer study would be helpful.

From clinical experience in patients with cystic fibrosis, and experimental work with other patients (but not research trial data nor systematic gathering of adverse event data), so far there is no clear downside to continued use even at doses somewhat higher than 2 grams a day.

Update 7/2012: an astute reader (thank you JK) found a 2007 article about NAC causing a lung problem in research rats (pulmonary arterial hypertension, sort of complicated to explain).Palmer I contacted one of the research team that published this study. The reply:

“I use NAC for some CF [cystic fibrosis] patients. The dose we used for mice was very high… about 1000-fold the normal oral dose. I think it is safe and I’ve been fascinated to see the data on efficacy…”

Neither a literature search [I’ve looked back 10 years] nor asking other researchers in the field revealed any reports of adverse effects of sustained use. This does not mean there is no risk. It means that continued use in some patients has not revealed any clear evidence of risk, so far.

There are reports of depleting Vit C and trace minerals, and warnings about NAC being contraindicated in established kidney disease. None of these concerns seem to be substantiated in the literature I’ve reviewed on safety, but I could have missed something. The Epocrates database for medications does not list kidney issues as a contraindication. Indeed, NAC protected kidney function in rats taking lithiumEfrati (no, they didn’t have bipolar disorder, these unfortunate rats). See more on trace metals, including copper, at the bottom of this page if you’re concerned.

Short answer: some folks have trouble with nausea. Start at a lower dose first to find out if you’re one, before you go up. Longer answer? read on.

Here is a comparison of side effects from a recent study in children.Hardan The authors specifically mention that “Interestingly, these side effects have not been reported in NAC studies in adults.”

Note that about half of the kids had nausea (some with vomiting even, we don’t know how many) and a quarter of them had diarrhea. These two problems are clearly more common than on placebo All the rest are not big numbers compared to placebo, not large enough to know for sure they’re due to NAC itself. 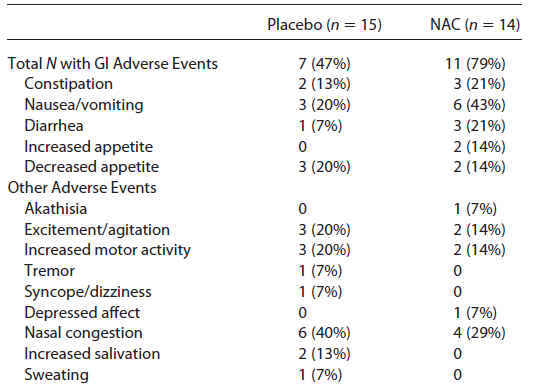 The Australian research team studying bipolar depressionBerk used 1000 mg twice a day, in addition to whatever else patients were taking. (In other words, this was an “add-on” study, not a test of NAC by itself.) In the other research studies (cocaine, nicotine craving; hair-pulling; gambling, etc.) the dose generally ranged between 1200 and 2400, with one study at 3600. The most common dose was 2400 mg (1200 mg twice daily).

In the study of cannabis addiction (think marijuana) in 15-21 year olds, they used a 1200 mg dose twice daily.

The best overall product is….

A 60 day supply is $15-30 on Amazon, and just two pills a day will get you the usual 2,000 mg daily dose. Plus, this product was tested for integrity by ConsumerLabs.

NAC is also available as a prescription, but the only version we’re aware of (Cerefolin-NAC) has other vitamins mixed in it and is more expensive than the NOW brand. However, if you need those other vitamins (methylfolate and B-complex vitamins, both of which have mood benefits), this one might be a good deal.

Details on Safety (not for the average reader)

The drugs.com page on NAC lists a potential to deplete copper over time. No reference. Where did this idea come from? Searching PUB MED, acetylcysteine copper, one has to go back over 100 references to 1990 for the first reference to trace mineral depletion. When this was investigated experimentally, looking for increased excretion in patients taking NAC, no increase was found.Hjortso The authors concluded that no supplementation with trace medals was required when NAC was used in an ongoing treatment.

Why did they even look? The only other remotely relevant reference I can find is three years earlier (search PUB MED acetylcysteine trace metals). In this earlier study, the question was whether a “chelation effect” (grabbing metal ions and pulling them out of the body, for the treatment of metal overexposure) was any greater for lead or mercury or other heavy metals.Ottenwalder

In other words, NAC has been studied for use as a means of treating heavy metal exposure. If it works to pull those metals out, maybe with long-term use it could pull out other body metals, like copper or zinc (which our bodies contain in very small amounts)?

Looks like this was the logic of another practitioner, who provides more references generally but none on this question. Another paper reassures:  “no increased excretion under normal circumstances.”Hjortso (not that one paper is enough to put the matter entirely to rest, but it helps).