Here is an important graph presented by Dr. Cassano and multiple colleagues in their article entitled “The mood spectrum in unipolar and bipolar disorder: arguments for a unitary approach.”Cassano 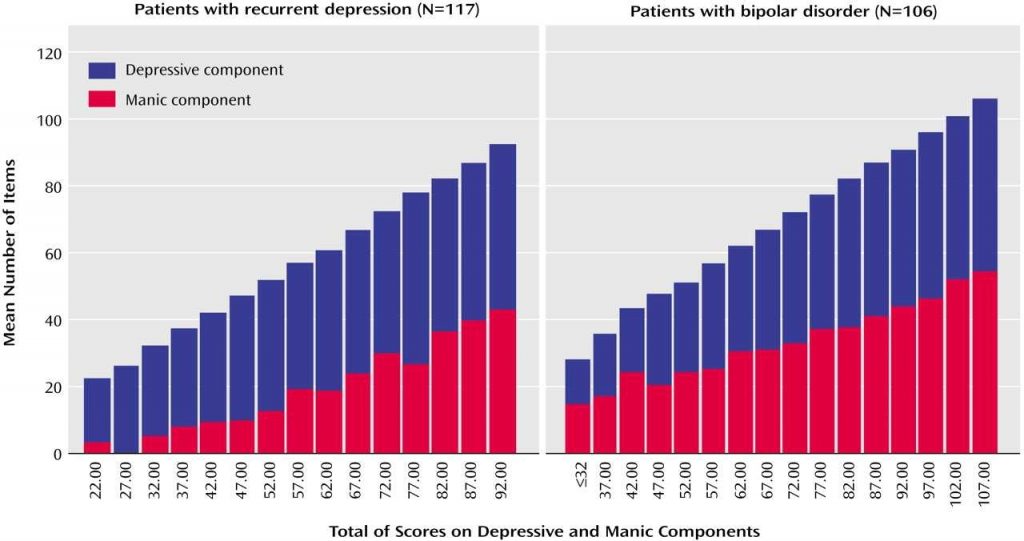 Your first impression of the meaning of this graph is probably right, but here is a little help with the format if needed. Basically these data show that even if the diagnosis is “unipolar” (left graph), many such patients have manic-type symptoms.

What’s shown at the bottom of each graph is the total number of symptoms, from 22 to as many as 107. The researchers used a very fine-tooth system looking for small aspects of 7 major symptom sets. For example, there were 9 separate questions about aspects of depressed energy levels (separate from depressed mood, which had 22 questions). Even just the symptom of suicidal thinking was broken up into 6 separate items of increasing severity, where in a period of at least 3-5 days the patient:

Note that a patient who says “yes” to symptom #6 will likely say yes to all the previous 5, so that the total number of items from the symptom “suicidal thinking/action” would likely be six.

Back to the graph: Of the 100 or so patients with unipolar depression (as determined by a structured interview called the “MINI”), some had as few as 22 of these items, and some had as many as 92. One of the points of the graph is to demonstrate that as the total number of symptom-aspects goes up, so does the percentage of manic-side symptom-aspects, even in a “unipolar” patient. That means that patients with more severe symptoms have more manic-side symptoms. These include manic energy, mood and thought — and these are present regardless of the diagnosis (which was obtained using the structured interview, with very good agreement between raters).

So, you want to know: what was the list of “depressive” and “manic” symptoms the patients were offered? In this study, this came from the “Structured Clinical Interview for the Spectrum of Mood Disorders”, which is available from the author’s remarkable website as a pdf file. The entire list consists of 140 items, distributed thus:

Here is the list of “manic” symptoms that were endorsed frequently by patients who according to the MINI interview had “unipolar” depression: