Can you ever get better? If you try enough different medications, might you find one combination that “really works”? Here are two ways to look at that question. Make sure you read them both: you can’t tell which one applies to you.

View #1: this “bipolar” idea could just be wrong. You could have borderline personality disorder (see my discussion of how hard it is to tell that from bipolar). If not that, you could have major depression, recurrent — which is what most psychiatrists who don’t believe or understand Bipolar II would probably say you have. In your case, they could be right. If that were true, you should keep working on psychotherapy, and/or antidepressants, and certainly exercise (remember, it was recently shown to be as effective as Zoloft, and better 1 year after treatment!). And if you have major depression, your life will be simpler than if you really do have Bipolar II: at least there is only one “direction” your mood can go, and the treatments are simpler, and if you can’t get treatment through a psychiatrist, your primary care doctor might still be willing and able to keep trying the antidepressants.

So, don’t forget: question the diagnosis if you aren’t getting better, and that goes for Bipolar II also. However . . .

What now? Should you keep going? Is there evidence that people like you can get better, after all this? You’re saying to yourself “hey, I need some hope, some hope there’s a point to all of this. Show me somebody who got better from where I am now!”

Ok, here are two such people. Unfortunately, I can’t tell you how long their improvements “stuck”.

Example #1: here’s that same mood record you just saw, now showing all the different treatments that were tried. The dotted chain

at the beginning of treatment represents antidepressants (note that’s when the hypomania’s started showing up). Then lithium was

added: a dud, you’d agree? (The patient seemed to agree too, stopping it a couple of times; perhaps understandably, as things were getting worse around then).

You can see all the other approaches that were tried. These medications include

for fluoxetine/Prozac, and two different forms of thyroid hormone (TT, T ). In early 1990 you can see

for valproate/Depakote, again a dud — the cycling continued. If you look very closely you’ll see that valproate

were tried together (at the very end of this record) and even that did not seem to interrupt the regular cycling.

However, here’s the hope part. If a person could try all those different medications and have that little to show for it, then really get better, that would make your situation a little more hopeful, wouldn’t it? Look what happened when a few more medication changes were made (and notice that all these had been basically been tried before, just not in this combination). Hint: the flat line in 1991 means no symptoms.

The NIMH (National Institues of Health) team was consulted and guided treatment from early 1990. After a while, they hit the right mix: lithium

was substituted for carbamazepine:

valproate and both thyroid’s were continued; and the antidepressant bupropion/Wellbutrin

was added. I recall being told that this improvement continued for several years.

Want to see another one?

Here’s one more such example, just to show you that it didn’t just happen once:

This illness is severe: 25 years of continuous symptoms; rapid cycling; and in 1996 – 1998 a plunge into severe depression that did not ease up despite trials of 19 different treatment approaches including 2 tries of ECT, antipsychotics including clozapine (the best but trickiest), and psychotherapy. I hope yours could not be worse than this. I have only three patients who have been through all this, and one got much better by this point.

Yet look what happens next: 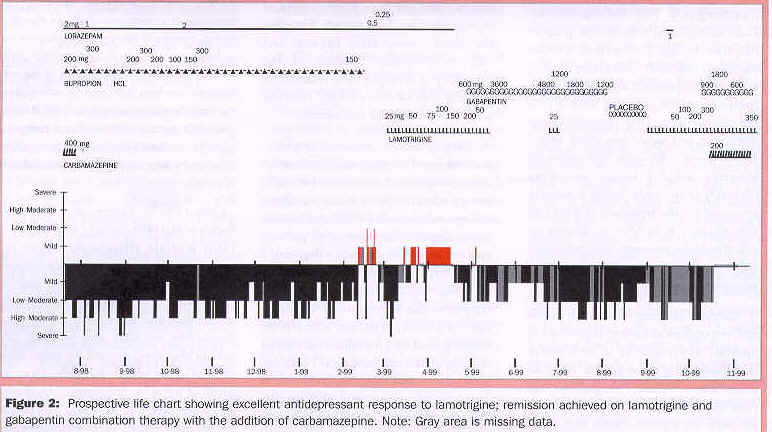 seemed to do something when it was added in March of ’99, but was associated with hypomania, perhaps at higher doses. She went on to have gabapentin (Neurontin

) which was another dud, you’d agree? Yet look what happens when lamotrigine and Neurontin are used together, near the end of this record.

The NIMH team added some carbamazepine

at a tiny 200 mg dose (she’d had twice that before with no benefit), and she became symptom free for the first time in 30 years. You can read more details of this remarkable treatment story in Bipolar Network News, v.6 (2) (scroll down to pg. 6). This woman went back to work.

What does all this mean?

To me this means that it’s worth it to keep trying. I check two things then I keep going:

#1. Do we have the right diagnosis? What could we be missing? (Granted that sometimes things come up later we couldn’t have seen at the time, or may have missed. Medicine, and me, are not perfect).

#2. How much risk do you face with any treatment we might offer you? Are there lower risk approaches we haven’t considered? (Exercise is the leader of this group, mind you).

I hope these graphs will give you some hope even if you have tried many, many different approaches already. And I hope you find something with clear benefit, soon.

Each time you try something new, there’s a risk of dashed hopes, also. After you’ve been through 10 or 15 different medication approaches, the line between too much hope and too little can get pretty thin, can’t it? Here’s a caution from someone who’s been there, from the Bipolar Child newsletter, 2003:

We are forever walking a fine line between that all-important emotion called hope, and a need to stay open-minded and await the data. One of the mothers we quoted above, put it so wisely when she wrote:

Although this medication has been wonderful for my son, I would not want to raise hopes for other bipolar parents by singing its praises too much. I know how it felt when I heard wonderful things, hopeful things, about other medications that were found to be effective with bipolar disorder.

As the parent of a bipolar child, when getting overly hopeful about a medication and then going through the painful and frustrating experience of trying it only to find it did not work (or worse–it exacerbated the symptoms of the bipolar disorder), it was heartbreaking.

Good luck to you. I “hope” you find something that helps.