People with “two shorts” — the “Blue People” from Chapter 1 — are more reactive to fearful stimuli: their brain’s fear center, the amygdala, becomes more active than that of people with “two longs”. Secondly, they are more likely to get Post-Traumatic Stress Disorder (PTSD) when exposed to a traumatic event as adults. And finally they are less likely to respond well to typical antidepressant medications. We’ll look at each of these three lines of research in that order below.

Research clearly shows that human fear responses, such as when you see someone who is in a position to hurt you frown in anger, are controlled in some way by a part of the brain called the amygdala. You can learn about the location of the amygdala in the human brain using the Brain Tour about fear.

In the important work of Dr. Hariri, when he was at the NIMH with Dr. Weinberger, research subjects were asked to look at the following image while their brains were monitored in a PET scanner:

Which of the three faces is unlike the other two? Answering this question focuses your attention on the fear in this woman’s expression, right? Imagine what your brain is doing while you look at those expressions. This includes just looking at images and trying to figure out which one is different, right? That’s what your brain is doing when you look at the following picture, following the same instructions (which of the three is different from the other two?):

Now, imagine you could “subtract” the activity of your brain just processing images of ovals, from the activity processing faces. The difference between the two is related to the facial images themselves, in this case primarily the emotion of fear. Dr. Hariri and his colleagues did this subtraction and found the following difference in brain activity. On the left are people with one or two short serotonin transporter alleles; on the right are people with two longs:

It may not look very impressive, the slightly more prominent redness and area on the left, versus the right. But the raw numbers look a bit more impressive, I think: 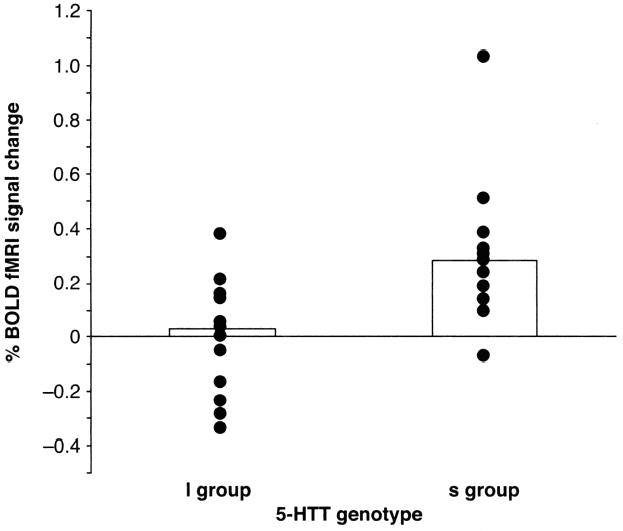 Comparing to the “two longs” group on the left (the L group), you can see that there was more brain activation caused by fear-images in the amygdalae of the subjects with “one or two shorts”, the S group on the right.

Like the story from Dr. Caspi and the New Zealand research team (Chapter 1), this work also was published in Science, because of the implications of the results as well as the precision of the research.

When Hurricane Katrina hit New Orleans in 2005, many people’s lives were directly threatened, and many saw loved ones die. These are the conditions that lead to PTSD. Often, people developed the anxiety symptoms of PTSD:

Yet many others, exposed to the same stresses, did not develop these symptoms. Why not?

Two protective factors have been identified. First, a high level of social support (friends, family, protection from living in poverty afterward); and secondly, a single gene. Yes, here is that yellow people / blue people story again (from Chapter 1). When living with little social support during and after the storm, yellow people, the ones with two long versions of the serotonin transporter gene, had less risk of developing PTSD. The blue people, with one or more short versions of the gene, were at nearly twice the risk of getting PTSD, as shown in the graph here: 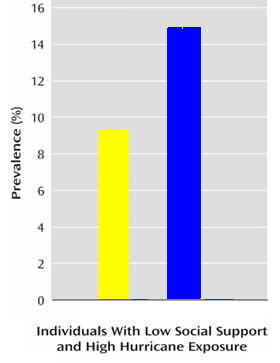 This is the work of Dr. Dean Kilpatrick and colleagues, 2007.

The connection between this gene length difference and mental health problems is strengthening. Indeed, the gene differences have been shown to influence how well people respond to treatment. Just as you might predict, people with two shorts did not respond as well to an antidepressant (SRI) for treatment of panic disorder,Perna bulimia,Monteleone or social phobia.Stein

What about depression? Wouldn’t you think that having two shorts would also affect response to an antidepressant there too? It appears likely that this is also true: several studies have already shown that people with two shorts do not respond as well to antidepressant treatment. But as reviewed in 2004, Malhotra a few studies have not found this result, including one in Korea, suggesting that there may be an ethnic difference or other factors which may need to be taken into account. Perhaps one of those factors might be childhood trauma, as shown in the original study about yellow people and blue people (Chapter 1), where the difference in depression only showed up when combined with a rough childhood.

Ideally we could use this kind of information to choose treatments most effective for a particular person’s genetic makeup. So far that’s still out of reach: the studies referred to here show general differences, not accurate predictors of treatment response. The results described here are not consistent enough to say “Oh, you have two longs? You’ll do well on this medication”; or “You have two shorts? You’d do better to start with this treatment approach”.

I’ll try to keep this section updated as more research in this area emerges.

On to Chapter 3: Short Genes, Alcohol, and Childhood Experience