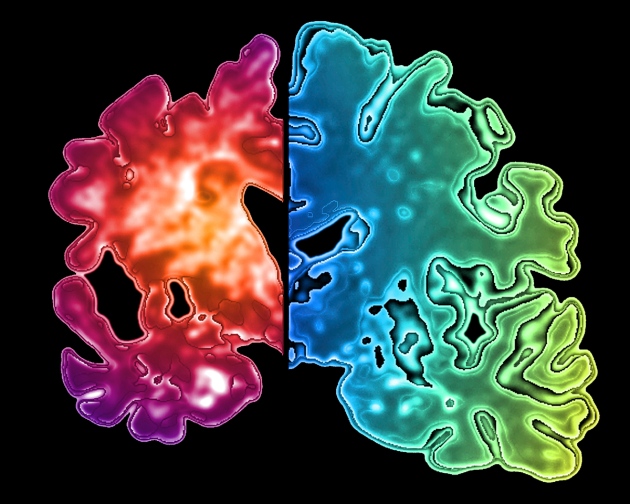 The answer is yes. In several different stress-related conditions all of which are known to cause hippocampal shrinkage, there is evidence that effective treatment can at least partially reverse this atrophy, leading to growth rather than further loss. Just how much recovery is possible remains to be seen, but in one study shown here, function returned to normal.  Exercise may be one of these effective treatments that can reverse brain atrophy.

Link to Chapter 12: Putting it All Together

At least three different psychiatric conditions cause the shrinkage (atrophy) you saw in Chapter 6:

Fortunately, in all three of these conditions, there is evidence that the atrophy can be reversed, at least to some extent, with treatment. This chapter will present that evidence, for each of these three conditions.

The evidence here is good news, though not pretty news, just a bunch of numbers. But they’re good numbers. If you’ve had severe depression, I’ll bet you will recognize some of yourself here. This is the work of Drs. Vythilingham and Vermetten, in Dr. Bremner’s group.Vythilingam

These investigators measure brain size and function before and after treatment with an antidepressant, either fluoxetine (Prozac) or venlafaxine (Effexor). Treatment lasted an average of seven months before the repeat testing. The following numbers show the results of standard memory tests, in which participants were asked to remember words or pictures and indicate later if they’d seen them on a previous list. If this table makes sense, skip ahead to the next section. If you don’t like numbers shown this way, read on below and I’ll step you through what some of these numbers mean.

Concentrate on the numbers in bold and ignore the +/- figures (which show the more statistically sophisticated the “range” of variation around a particular result). There are two main findings here: first, an improvement in function; and secondly, an increase in brain size, at least in one subgroup of patients.

First, look across to the right in the green row, Visual memory. You’ll notice that the numbers are all about the same (the high p value just means “they’re all about the same”). This means that people with depression don’t have trouble recognizing pictures, as much as words, as you’re about to find out.

Now look at Delayed memory in the pink row. The first column, the Control group, shows you what the numbers are supposed to look like (number of words from a list that the participants could remember later). These folks were not depressed nor had they ever been depressed. In the next two columns, you’ll see the results from people with depression: first, before treatment (18) — much worse than the Controls, right? This means these patients, compared to “normals”, were having a lot of difficulty with remembering words. Sound familiar to you? Lots of my patients tell me they’re having terrible problems with remembering people’s names, and sometimes even simple words, e.g. “you know, that thing you sweep the floor with?”

The good news comes in the following column, with the After Treatment value of 27. The patients have completely recovered! Their memory for words is as good as the “normal” group! That is very good news indeed. This result was the same whether the recall test came hours later or immediately after the word list (the immediate recall results, showing the same pattern, appear in the gray row).

Another research group has shown this same effect of exercise, improving cognitive function.PNAS But they have gone on to shown that those elders (average age 66) who participated in a fitness program actually increased their brain size, just as we saw the antidepressants do in the study described above. Colcombe

On the basis of this one small study, we have further proof that exercise is an effective antidepressant. But the most exciting part of this story is this small bit of evidence showing that exercise, like other antidepressants, can potentially reverse (at least partially) the brain shrinkage caused by depression. You can see why I wish every patient who was going to receive an antidepressant would have to first get some regular aerobic exercise, either on their own or in a program. It looks, for now, as though it works the same way.

This table also shows that treating depression reverses the hippocampal shrinkage we’ve seen in previous chapters (this is one of the first such results; it will be important to see this result repeated). The numbers in the blue row at the bottom refer to the size of the hippocampus, measured by MRI scanning (they did not open these people’s brains and go look!). As you can see, after treatment, the hippocampus is bigger. The very low p-value means this was a very significant shift, statistically. Because the hippocampus, the organ of memory, is bigger after treatment, the implication in this study is that perhaps the memory improvement is actually because of the hippocampal growth. That remains to be shown conclusively but is the current working hypothesis in mood research.

One remaining twist on this research: the hippocampal growth was shown only for patient with “atypical” depression. This variation is thought by some mood experts to be a bipolar-related mood conditione.g. Benazzi. Just why this depression variation might respond to treatment with hippocampal regrowth is unclear: is it because this variation might have more shrinkage in the first place? Or is atypical depression somehow more responsive to the growth-factor effects of antidepressants?

In 2003, Dr. Vermetten and colleagues showed direct evidence of hippocampal growth in patients with PTSD, as shown in the following graph. Treatment in this study was the antidepressant paroxetine (Paxil).Vermetten

Each patient’s response is shown in a different color. Some do not improve, such as the patient represented by the pale yellow triangle line. But many do improve, and some improve a lot, such as the pink square person, whose hippocampus grew by more than 30%! As you can see, this raises cautious hope–cautious, because there is no guarantee treatment is going to help. It may, and it may not; but if it does, it can help a lot, at least for some people.

One of the most well-known treatments for bipolar disorder has been shown in several ways to reverse brain atrophy. In rats, direct evidence of increased neurogenesis (a phenomenon described in Chapter 7) with lithium treatment has been shown by Dr. Manji’s group:

These photographs show the same region of the rat hippocampus, the “dentate gyrus”, which you recall from Chapter 7 is the birthplace of new cells for this part of the brain. The top photo was taken before lithium treatment, and the lower one after lithium. As you can see, there are many more new neurons (visible here because their nuclei are stained with a material that marks new DNA being made) in the lower picture. Isn’t that amazing? And isn’t it exciting to think that we may be discovering just how these treatments really work, to the point where you can see it in a pair of pictures like these? (Unfortunately, this kind of research involves the death of many animals, leading to a complex ethical dilemma as to whether this knowledge justifies that kind of approach. I will sidestep that ethical debate for now, as the work is done and we should at least make sure that as many people benefit from the results as possible.)

Since we humans are different from rats — or at least we’d like to think so — we can of course wonder whether the same effects of lithium might happen in human brains too. Is there any evidence like this, in humans? To answer that, we’ll need a way of looking at living brains. Fortunately, our intrepid researchers have figured out a way to show the growth of new cells without having to go right in there and look for them. It turns out that new cells make a lot of a chemical that shows up on an magnetic resonance scan (in this case, not MRI but “MRS”: the scanner is tuned to function in a different way than it does when making images, and instead calculates the density of particular molecules. This is called magnetic resonance spectroscopy: MRS). This chemical is called N-acetyl-aspartate (NAA).

So, we can ask, does treatment with lithium in humans increase NAA levels in regions of the brain know to atrophy in depression and bipolar disorder? The answer is yes, as shown by Dr. Manji’s group, this time led by Dr. Greg Moore.Moore Of course, as exciting as that result is, we find ourselves immediately asking for more! NAA increases just show that cells are probably growing. Does this actually lead to increased brain size, as shown above for depression and PTSD? The answer there also appears to be yes , based on preliminary results. In fact, you can see increased brain size with lithium treatment of bipolar disorder, even if you look at the entire brain at once, not just the hippocampus or frontal lobes.

Again we are looking at the work of Drs. Moore, Manji, and colleagues. Moore Looking at the entire cortex (shown in red above), the NIMH team found the following effects of lithium treatment in bipolar disorder

In just 4 weeks of treatment with lithium, almost every patient had an increase in their entire gray matter (“normalized”, if you must know, means that each patient’s values are shown relative to where they started; that’s why all the values start at 1).

Studies like these have led to the research on whether lithium might prevent Alzheimer’s disease. Makes sense, right? Alzheimer’s is a loss of hippocampal and frontal neurons. Lithium preserves neurons (particularly in those regions). Could a little dose of lithium be protective? Several studies suggest this, as of December 2014.Ghaemi More on as soon as I can get back here: what more important topic can there be?

That brings us to the end of this series of research reports. The remaining chapter will take you on a quick-tour review.

On to our final chapter…. Chapter 12: Putting it All Together