The Yellow People and the Blue People

Is depression a moral weakness? Certainly people who have never been depressed can easily make moral judgements about people with symptoms, thinking or saying things like “she just needs to get herself up and get going”. And people with symptoms, whose very illness tends to cause thoughts like “I’m such a failure”, also can easily make moral judgements of themselves.

Ironically, here you will see evidence that a single gene, completely outside a person’s control, has a strong impact on whether someone becomes depressed when repeatedly stressed. At the end of this brief chapter, you’ll see that how a person was raised is another powerful factor, which is also completely out of one’s control as an adult. However, people have to take responsibility for what’s going on now, regardless of their genes and their childhood. Yet perhaps understanding the effect of genes and childhood will help people take that responsibility, as they will understand more clearly what they are trying to manage. I hope that’s true, and offer these brief chapters for that purpose.

1) The research shown here is regarded as conclusive. The gene described here has been under study since at least 1998. Most studies, like the ones shown here, have found the same result as you’ll see in a moment.  But a few have not and a significant 2008 review raised doubts.JAMA  However, since then many more studies have appeared and nearly all of them find the same general results.2011

2) Although it appears that one gene has a lot of influence on what happens to people when they are stressed, you should not conclude “see, there’s nothing I can do about it!” Just because we know a part of the cause of depression is beyond your control does not mean that the solution is beyond your control. Indeed, perhaps knowing, at a biological level, that a big part of the problem is “not your fault”, might actually be part of the solution for you.

3) Not all struggles in life have to do with the genetics shown below. In fact, many of them may be “life problems” that can occur for anyone, regardless of their genes. Worse yet, trying to fix these problems with medications; or view them as “biologic”, can actually get in the way of dealing with them.

We’re going to start with some graphs. Don’t worry, the whole story is not going to be like this. But once you see what’s on them, I think you’ll agree that what they show is extremely important.

Here’s a set of four results. The main point is the same in all of them. You’ll learn in a minute that the different colors stand for a single factor which determines — in part — how badly someone’s life may turn out, depending on how many stressful life events she goes through. Take a look. I’ll tell you what the graphs mean, and then what that factor is, below.

As you can see, if a person has very few stressful life events (defined in a moment, below), they may still have symptoms of depression, but it’s not very likely. If they have a lot of those events, then they are much more likely to have depression — especially if they’re a “blue person”.

By comparison, the “yellow people” can have a lot of stressful things happen without increasing the likelihood of getting depressed. Look at the difference: if you’re a yellow person, even 4 stressful events only raises your likelihood of full “major depression” to about 15% (lower left-hand graph). But if you’re a blue person, those stressors raise your chances of depression to almost 50%!

What is the color factor? It’s a gene. It’s just DNA. It has nothing to do with anything you ever had any choice about. You were just born this way. The gene story gets a little complicated, but if you don’t understand the explanation that follows, that won’t matter too much. What I want you to see is just how much impact a gene
can have on a person’s experience of the world.

Think about it: if you’re a yellow person, you could easily look at blue people and think “hey, pull yourself together, you wimps — I’ve been through the same or worse, and I’m all right!” Then they could proceed to explain to the blue person just what they’d done to come through those stressors okay. Here’s how you do it, see? You just have to ….” They could attribute their success to God, or their own determination, or the great support from their friends. All those explanations could easily have some truth to them too. But look at how much impact the genes alone have: if you’re a blue person from
birth, your risk of depression when stressed is a lot higher.

Similarly, if you’re a blue person, you could look at the yellow people and think “what’s wrong with me? They’ve been through the same stuff and they seem to be doing okay.” Then you could proceed to explain to yourself why you’re struggling so much: it’s because I’m just weak. If I tried harder, I’d be better off.” Why don’t I seem to be able to try harder?)”

You can imagine some of the variations on this: I shouldn’t have tried to go to college, I just don’t have what it takes”, or “It’s because I drank so much alcohol all that time”, etc. And even here, there might be some truth to those explanations. But what if a big part of the explanation, for why your mood is so affected by stress, comes down to your genes? Wouldn’t it be ironic if meanwhile you were telling yourself it is “your fault”?

What is this gene?

Let’s take a look at this gene. (Remember, if it gets too complicated for you here, you can just skip ahead to the next chapter. You’ve already gotten the main point. )

This gene codes for something called the Serotonin Transporter. It takes serotonin from the space between nerve cells and recycles it. If you need some basics on that last sentence, like a 1-pager on how nerve cells communicate, try this summary.

In the space between cells, the “synapse”, neurotransmitters like serotonin are recycled and re-used. The recycling system is called the serotonin transporter. In the image below, borrowed from the NIMH via a well-done college student’s paper on this subject, you can see the transporter at the lower left edge of the transmitting (“presynaptic”) cell. 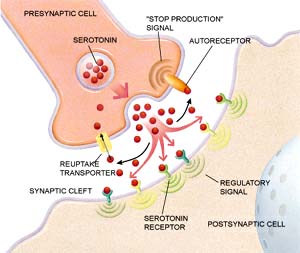 This serotonin transporter itself is the same in “yellow and blue people”. What’s different is the way it is controlled.

What’s the difference between Yellow People and Blue People?

The search is on to determine, in living humans, just what difference these two alleles make in serotonin function. One recent study found differences in how frontal cortex responded to a serotonergic antidepressant.Smith How to interpret this work, though, especially for doctors and patients, is not clear yet. So far it definitely does not look as simple as “the long allele people make more serotonin than the short allele people”.

However, now for the most stunning result from the New Zealand research team. The details of their study are summarized below. For now, let’s just say that the way they did this research gives their results much more power than the average study, because they have information about the people they studied all the way from birth. They used information about the study participants childhood experiences to look at how the short and long alleles interact with the kind of childhood environment in which they grew up.

The researchers divided the entire group, nearly 1000 individuals, into three groups, based on their childhood experiences. “Maltreatment” was determined by asking the participants at age 26 about their childhood, but also from the childhood observations the researchers had made at age 3 (mother-child interview) and age 7 (parent interview). “Maltreatment” included physical abuse, harsh or rejecting parental style, and sexual abuse. Look at this result:

As you can see, the “yellow people” are amazing: even when they grow up with physical abuse, harsh treatment from mother, and sometimes even sexual abuse, they hardly seem affected by it (at least in terms of becoming depressed as adults). By comparison, when the “blue people” are experience severe childhood maltreatment, two thirds of them are likely to have an episode of major depression as adults. That’s a very high percentage.

Finally, here’s one more stunning twist in this story, from a large repeat study which found the same results.Kendler Who would you guess has more trouble with stress, men or women? Well, it’s men — if they are blue men (two short versions of the serotonin transporter gene). The graph below shows how much more likely the blue men are to have a major depressive episode — over four times more likely:

But unfortunately “blue” women are the ones who are at the greatest risk of depression if stressed (notice that they’re just like everyone else if life doesn’t crash hard on them):

Almost an eight-fold risk, if you’re female and have two short versions of the serotonin transporter gene. That’s almost enough to make me want to find out which genes my female relatives carry, especially the young ones. We’ll come back to that question in Chapter 5. It’s not simple.

You’ve now seen the main point about the effect of two short alleles on whether a person becomes depressed when stressed. Below you’ll find the details of the study from which the graphs above derive. The next chapter will show you how the short gene story goes beyond just depression.

DO NOT GO FURTHER! unless you want the study details

Details of the study by Caspi and colleagues

You can read the details directly from the authors’ Science supplement, but it’s pretty thick. Here are the choice details, in my view:

One more interesting detail from a broader population sample: what percentage of different ethnic groups have at least one short version of this gene? (sorry no reference for this table except a website collection of data):

On to Chapter 2: Short Genes and Other Mental Health Problems

Acknowledgement:  In this chapter we see in particular the work of Avshalom Caspi and his colleagues at the University of Wisconsin and the Dunedin Multidisciplinary Health and Development Research Unit.