A reader forwarded the graph and the table below, inviting their inclusion. Although these are the work of a recognized authority on borderline personality disorder, I respectfully disagree.

If you’ve not come here from there, here is my main page comparing these conditions.

This diagram was forwarded by a reader. It is from Borderline Personality Disorder: A Clinical Guide, first edition, by John G. Gunderson, MD. 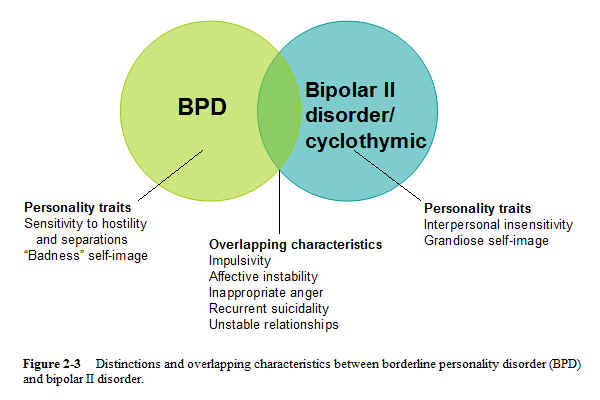 Okay, let’s take a look at this.

1. Is it true that patients with bipolar disorders lack “interpersonal sensitivity”? They don’t have “thin skin.” More like, relatively thicker skin?  Sorry, not only have I not observed this among my patients (if anything it’s the opposite) but I’m not aware of any data to support it. Maybe I missed something somewhere. Never heard of this idea. And it definitely does not jive with my experience.

There you go: warring experts, or worse, an expert (Gunderson) versus your basic clinician.

2. Grandiose self-image. Well, at times, that’s true, it’s almost by definition (like do this around a psychiatrist and you might get a diagnosis). But “personality trait”? That is simply wrong. Dr. Akiskal in San Diego has written extensively about “temperament” in bipolar disorder. In his work, he identifies dysthymic temperament (relatively permanently bending toward depression); and cyclothymic temperament (moody); and hyperthymic temperament (full of self-confidence, most of the time — but not “grandiose” per se, and not guaranteed immune from depression with relative loss of that confidence).

So on this one I just flat disagree.

The bipolar column describes Bipolar I more than bipolar II. Manic phases can
include all these features. In hypomania, if they are present at all they are
generally quite subtle, every one of them.

How about the other way around: do patients with bipolar disorder sometimes manifest the traits shown here to be BPD?

So, on balance, I guess I just disagree with these characterizations. More importantly, as I’ve described on my main page on this subject, the distinction is not helpful. What matters is whether an antidepressant is likely to help, if added (less likely if the problem is more like bipolar disorder).

Even more commonly, the question is whether an antidepressant already in use could possibly be fueling the fire and making things look borderline — that, I have seen many times. So many times that I routinely try tapering off antidepressants (very gradually) in patients whom others have called “borderline.” Of course this doesn’t always make things better. Rather often, things are about the same. But quite often as well, while mood is not much better, a lot of the agitation and suicidal stuff diminishes.

An Audible Recovery
Antidepressants in Bipolar II: What the Experts Do
Mood, Metabolism, and Cognition: An Interview with Rodrigo Mansur
Do Benzos Treat Depression?