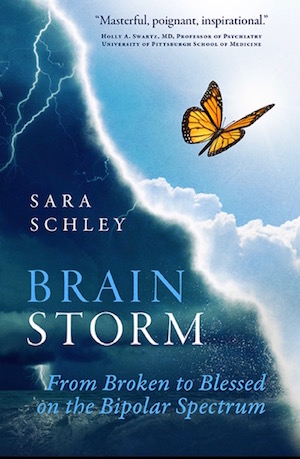 But I am not Bipolar. I am Bipolar II. I was not successfully diagnosed as such until I was 46 years old, 25 years after that first collapse. Knowing the difference between Bipolar and Bipolar II is a matter of life and death. I didn’t write BrainStorm to tell my story. I wrote BrainStorm to save lives.

For many years, Kay Redfield Jamison has told the story of bipolar disorder in her best-selling memoir Unquiet Mind. It was moving, real, and relatable, but it tells the story of Bipolar I Disorder. Now, Bipolar II has found its own voice in Sara Schley.

Sara Schley’s new book Brain Storm captures the turbulent experience of Bipolar II, a common mood disorder that lacks the manic highs of Bipolar I. In place of those highs is more depression, more anxiety, and a hard-to-identify state of excitation called hypomania.

The book is hard to put down. “I read Brain Storm straight through while standing in the kitchen,” says Jim Phelps. Like many with Bipolar II, Sara was not diagnosed until her 40’s, after several decades of being diagnosed and treated for Major Depression. Hopefully this book will bring greater recognition to this misunderstood mood, and her readers will not have to wait so long to find the answers – and the recovery – that Sara did.