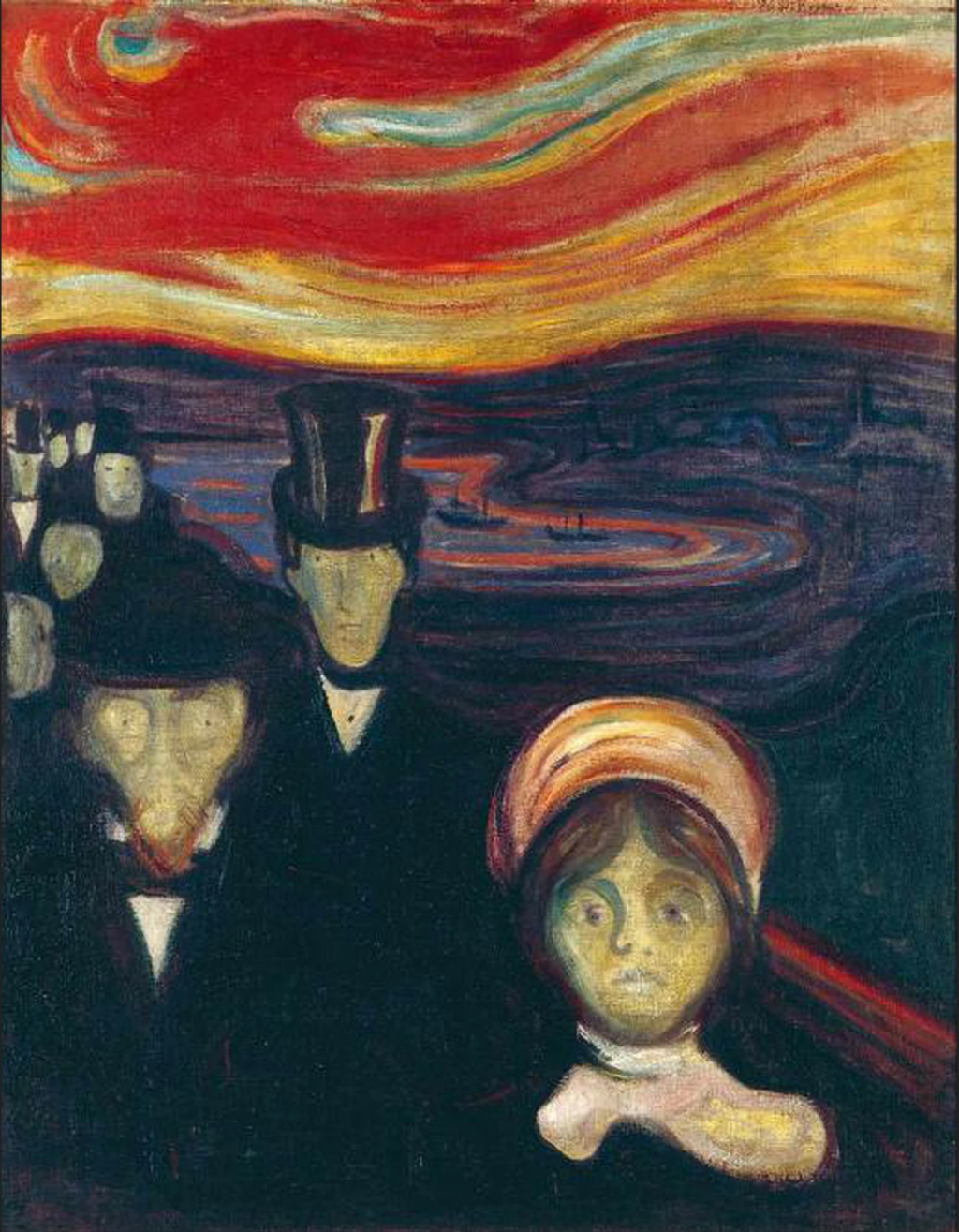 Anxiety can be a symptom of bipolar disorder. This was recognized by the fellow who originally described bipolar disorder as such, Dr. Emil Kraepelin, back in 1921. He described “anxious mania”, and also “excited depression”, which included a “great restlessness”. He specifically named anxiety as one of the components of this illness. All that requires saying, because “anxiety” is not generally regarded as a bipolar symptom. Yet it clearly is, as summarized in an excellent review by Freeman, Freeman and McElroy.Freeman

The International Society for Bipolar Disorders (ISBD) further strengthened the view that anxiety can be part of bipolar disorder in a Task Force report detailed below. That ought to be enough to put any remaining controversy about this to rest.

The International Society for Bipolar Disorders assembled committees of bipolar specialists to prepare reports on several aspects of bipolar diagnosis.

One particular report deserves attention here: first, because the authors are very well-regarded bipolar experts. Second, because it was published in a top psychiatric journal. And most importantly, because their statements are firm and clear.ISBD

Their paper was on “mixed states” in bipolar disorder, which is the primary setting in which anxiety makes sense as a bipolar symptom. For basics on “mixed states”, see that section of the Diagnosis page. Reviewing briefly:

can be part of bipolar disorder. In fact, the ISBD report states that anxiety is “a core symptom of mixed states”.  Here the ISBD is not alone.Kauer-Sant’anna

That ought to be enough to put to rest any controversy about this. Unfortunately, however, several of the “anxiety disorders” in the diagnostic manual (the DSM) can look like  “mixed states”. So confusion is the norm. One ought to be confused. As you’ll see below, it’s almost impossible to separate some of these diagnoses.

Two ways to have anxiety with bipolar disorder

Anxiety as a symptom of Bipolar Disorder

What is the anxiety of bipolar disorder like? Patients describe it as “agitation”, and sometimes that is quite obvious: their foot bounces on the floor while we talk; they pick at their nails; sometimes they can’t even bear to sit still and will get up and pace around the office during our interview. But sometimes the agitation is only “inside”: patients experience “too much energy inside my skin”, like they’re going to “explode”, and usually their thoughts are going very fast (sometimes called “racing thoughts”). However, when this is severe, people may not experience that fast thinking, but instead just an extremely disorganized thinking — not being able to keep their mind on one thing for more than a few seconds, not being able to accomplish anything. Of course that can make “anxiety” worse as people recognize that they are really ill with something that is not obvious to anyone else, yet they are not really functioning either. How do you explain that to someone?

When this kind of anxiety is present with other manic symptoms like irritability, it can create an awful experience people feel desperate to get out of. (Very often they discover that alcohol can help settle this down for an hour or two. Unfortunately when it wears off, the symptoms come back, very often worse than before. If a person responds to that by drinking more, that can cause a worsening of the condition over several days or weeks — but because they get brief relief from drinking, they keep doing it and often have to drink more over time to keep their symptoms controlled. This is a dangerous spiral which is statistically associated with successful suicide attempts, so represents a clear reason to get help as soon as possible.) Fortunately there are very good medication approaches to this which can help within an hour. Olanzapine/Zyprexa has a special role here, in my view.

When this kind of anxiety is present with depression, this may be the worst combination of all. Anxiety is a very strong risk factor for suicide when people are depressed. The future looks hopeless and pointless because of the depression; and the present feels unbearable. Again, it’s important to know that this combination is very treatable. If you find yourself feeling and thinking like this, and you don’t have a doctor or therapist to help you manage it in the short and long term, you should take specific steps to keep yourself safe, including going to an emergency room if necessary.

Anxiety as a separate condition

Now we’ll have to be more specific about “what kind of anxiety are we talking about?”. There are several specific forms of anxiety which appear to be clearly separate from bipolar disorder (e.g. there are people with these conditions who clearly do not have any bipolar symptoms). Here’s a list, and then we’ll look at specific symptoms that identify each one. After that we’ll look at the treatment implications of having one of these. Jump to each by the link below.

Most of these have been shown to occur more often than you would expect in people with bipolar disorder (more often than the percentage found when thousands of people identified at random from the phone book were interviewed). We’ll look at each one or you can use the link above to jump to the one you’re interested in.

There is a lot of overlap in the diagnostic criteria for GAD and bipolar II. We need to look at this in some detail because they may be actually the same thing, at least in some people (as opposed to the rest of the list below, which are somewhat more “separate”). If you’ve read about GAD and think you have it; or if you’re curious about anxiety and bipolar disorder generally (pardon the pun); please read this essay on GAD and BPII.

This condition is well described, including its treatment with a psychotherapy approach (in addition to or instead of antidepressants), on the useful HelpGuide.org site. Go there to learn much more about social phobia.

However, some of my patients with bipolar disorder have clearly had “cycling” in their social phobia symptoms, that goes right along with their bipolar cycling. They get much more socially anxious at some times than others. Or rather, on some occasions, which can be rare but seem always to coincide with their hypomanic phases, their social phobia virtually disappears. They can talk freely, even in a group, even with strangers. They can walk up and introduce themselves to people they have never met. They can speak up in front of others, which they normally would strictly avoid. Then, when their mood and energy cycle back down again, their social anxiety returns. They avoid social circumstances, and all the anxiety they usually get if in the center of attention, even dealing with the check-out guy in a grocery store line, comes back.

This “cycling” of social phobia symptoms along with bipolar symptoms suggests that these conditions are not just co-occurring, but are connected somehow. However, unlike the anxiety of GAD which seems to go away when bipolar cycling is controlled, some degree of social phobia symptoms seems to hang around when bipolar disorder is controlled. This is extremely frustrating for a person who knows that once in a while they don’t have to be like this.

However, the usually offered treatment for social phobia — e.g. antidepressants like paroxetine/Paxil — can make bipolar disorder worse.  But fortunately, there is an excellent treatment for social phobia that does not rely on medications at all. This therapy is described well on the HelpGuide site, here.  Usually this treatment is best done with the help of a therapist who knows “cognitive behavioral therapy”. If you can’t get such a therapist, some people have had some success on their own using a basic online anxiety treatment program (free). It works great, but very few people can do this on their own and get through it:  “e-couch” from Australia.

Panic Disorder (with or without Agoraphobia)

In my experience when people have their bipolar cycling controlled, they stop having panic attacks in almost all cases (there are surely some exceptions). So rather than focus on the panic symptoms, I almost always go after the bipolar symptoms first.

Note that if for some reason panic symptoms persisted after bipolar symptoms were treated, there is a non-medication approach that works better in most people than pills.

This condition too is described well by a HelpGuide page. About 40% of people with bipolar disorder also have PTSD.Freeman The converse appears to be relevant as well: growing up in an environment of trauma appears to raise the risk of getting bipolar disorder, if one is genetically susceptible.Post

I see these two conditions together all the time. Sometimes it’s very difficult to tell them apart from one another. This has implications for treatment, as discussed below.

For more information on OCD, there is a comprehensive website by the OCD Foundation. Their page on “What is OCD?” is a good starting place.

OCD has a complex relationship with bipolar disorder. I’ve seen some patients start out looking like they have classic OCD and end up looking like they have definite bipolar disorder without OCD. These two conditions might be part of the same thing somehow, at least in some people. At least we know they are found together very often, much more so that one would expect. In one study, 20% of people with bipolar disorder had OCD, twice the number seen in unipolar depression (which is also higher than people with no diagnosis).Chen

A group of researchers has looked at how OCD and bipolar relate. They found that whereas unipolar depression was “incidental”, i.e. not clearly related to the OCD (although common), by contrast bipolar disorder seemed to be more directly related to the OCD. For example, people with religious and sexual obsessions as part of their OCD were more likely than those with other obsessions to have bipolar disorder. The authors specifically recommend that bipolar disorder take precedence over the OCD in terms of which is treated first.Perugi

These include snake, spider and height phobias, which are common. They are also extremely treatable using the “behavioral” approaches (i.e. not medications) described for some of the anxiety disorders above (success rates exceed 80%). There is no specific association with bipolar disorder, to my knowledge.

I would go a bit further. If symptoms remain, “treat them” with a psychotherapy if at all possible rather than an antidepressant. There are excellent therapies with results equal to or better than medications for panic and social phobia. There are therapies which get good results, though often only with medications, for PTSD and OCD. If after the therapy has been tried, an antidepressant still must be considered, it should be added to mood stabilizers already underway (per theexpert recommendation cited above).

In my opinion, when a diagnosis of GAD is made, the patient should be informed about the extent of overlap with bipolar disorder and an effort made to determine if the patient might have bipolar disorder. (At minimum, use the screening questionnaire called the MoodCheck ). If after that the patient prefers to start with an antidepressant (versus psychotherapy, if available; or a mood stabilizer trial), don’t forget to look for hypomania or cycling of mood and energy in the first few months.

If you have anxiety symptoms, or if you have an anxiety condition in addition to your bipolar symptoms, make sure your doctor and/or therapist know about these because even with bipolar disorder they are treatable. The trick is to make sure the treatment for the one doesn’t make the other worse. That can be done.

An Audible Recovery
Antidepressants in Bipolar II: What the Experts Do
Do Benzos Treat Depression?
Hagop Akiskal and the Bipolar Spectrum