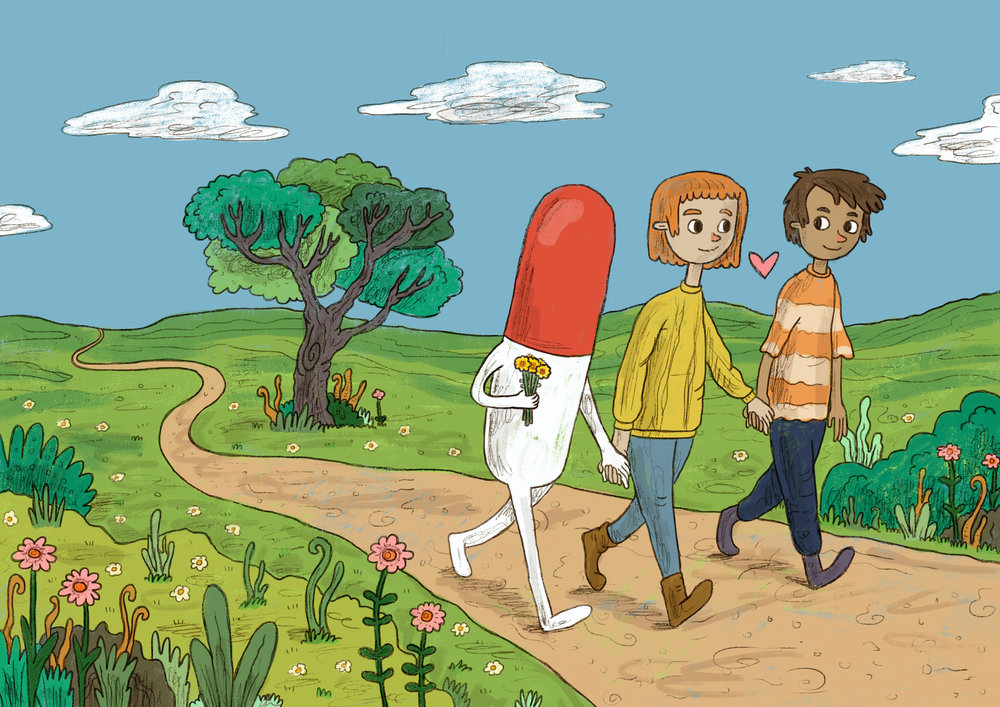 The controversy over antidepressants in bipolar disorder boils down to these 4 questions:

If those answers have left you wondering why you should even consider an antidepressant, skip ahead to these 9 alternatives to antidepressants that can treat bipolar depression without making the overall condition worse. Otherwise, read on.

1. Do antidepressants even work in bipolar depression?

No. Yes. Maybe. Only in Bipolar II. Depends on how long you watch — and how you define “work”.

Let’s try that again. There are two big lines of research about this. In one, which led to a formal study that took years and was supposed to answer this question directly, antidepressants were no better than placebos for bipolar depression. Sachs

Overall, nearly everyone would agree: it’s suprising how little evidence we have in support of using antidepressants for bipolar depression, especially given how often they’re used. When there’s very little evidence to consider, it’s easy for controversies to persist. Thus there are loud voices on both sides of this issue.

But in 2013 the International Society for Bipolar Disorders (ISBD) issued a very clear set of recommendations.Pachiarotti Simplified: don’t use antidepressants, except in patients who’ve:

And finally, in 2014 editorial entitled Never without a mood stabilizer, a highly respected researcher asks why:

Yes. Almost universal agreement. But, how often does this happen? Some say 4% of the timeGjisman, some say 44% of the timeTruman in some circumstances. Yet it doesn’t really make much difference, you see:   yes, there is significant risk, at least 1 per 25 users, maybe more like 1 per 3 or even 1 per 2 for some people.  But because there are at least 9 alternatives to using an antidepressant to treat bipolar depression, most patients with bipolarity do not have to decide whether to take the pro-mania/hypomania risk of an antidepressant. They can just use something else.

Here are some groups of people who are at greater risk for having hypomanic or manic symptoms if they use an antidepressant:

But remember: there are at least 9 alternatives.

Quoting from an editorial in the American Journal of Psychiatry, March 2008, by Nassir Ghaemi, one of the principal investigators in the STEP-BD, a large bipolar research trial (emphases mine):

If you’re skeptical about these conclusions I’ll show you some data I think supports them, but it’s pretty technical stuff.  Before I invite you there, does anyone think antidepressants have a stabilizing effect? Well, in Bipolar II,  Dr. Gordon Parker thinks so.Parker So do Drs. Amsterdam and Shults, whose 2013 study is similar but much bigger (however, read the Comments you’ll see linked at the bottom of their abstract; very telling, I think.)

I think they’re right, that antidepressants can have a stabilizing effect — for a while.  Consider two cases.

When people ask me “how long does it take for an antidepressant to cause manic or hypomanic symptoms?”, I answer with the experience of two patients. First, one guy told me “20 minutes after my first dose of Paxil I felt like I was shot out of a cannon.” So that’s the fastest it can happen, I figure.

The second I wrote up as a case report, it was so telling.Phelps One of my patients went 7 years on sertraline/Zoloft, doing really well, much better than on other antidepressants she’d tried. She’d “joined the human race”, she said, after years of depression. Then she developed anxiety. So her primary care provider increased her antidepressant (because antidepressants are used to treat anxiety; not an unreasonable move).

Ka-boom, she had horrible anxiety, agitation (like wanting to crawl out of her skin), suicidal ideation, terrible insomnia, and restlessness). This did not subside until she tapered off sertraline, despite desperate attempts with a bunch of medications including antipsychotics, anti-anxiety medications, and mood stabilizers. But the clincher was when she tried, about a year later, going back on sertraline, trying to get that “normal” feeling back.  One quarter of the dose she did so well on for 7 years produced the same agitated state within three days.

So, I think antidepressants can work quite well, for a while. Somewhere between 20 minutes and 7 years… But then they can cause mixed states and suicidal ideation, at least in some people. How many people? that’s a complete unknown. I don’t get to see the folks who are doing great years later, so I can’t judge by all the patients I see whose antidepressants seem like part of the problem. My colleague Dr. Manipod and I published a case series of 12 people who looked “unipolar”, i.e. not bipolar, but who got much better when their antidepressant was stopped.Phelps/Manipod

Other colleagues have reported similar findings, e.g. 15 more cases.Sharma One has gone so far as to publish a couple of papers describing what he calls “tardive dysphoria” .  Short explanation of the term: he’s describing what happened to my patient above who did so well on sertraline for 7 years. El-Mallakh

3b: Kindling and Long-term Worsening

Could antidepressants cause kindling”? The phrase “kindling” is borrowed from neurology, where it has been used to describe forms of epilepsy, which appear to worsen with time. In this model, it is as though each episode of illness makes later episodes both more likely and more severe. It is clear that some patients’ bipolar disorder worsens as they get older, with more frequent and more severe episodes. Could this kind of pattern be triggered by antidepressants, at least in some susceptible patients?

Here is good visual example of the phenomenon we’re talking about here. The graph shows the mood episodes of a man whose bipolar disorder seemed to clearly worsen with time (his age is shown at the bottom of the timeline; red means hospitalized, up is manic and down is depressed, of course):

Note the pattern. After each episode, the next episodes tend to come sooner and become more severe. This is the “kindling” pattern, though this man’s experience alone of course does not prove that the illness itself can do this. There could have been some other factors, such as alcohol or other drugs, etc.

However, suppose some forms of bipolar disorder really do “kindle” themselves. If that is so, then any worsening has the potential to be a “permanent” worsening. What if the patient above had been treated with an antidepressant at age 18, during that first depression? In that case we might see the mood episodes come on even faster, so that the clustering of mood problems from age 35-40 might have started even earlier, at age 25-30.

This “kindling” concern is very rarely raised in the bipolar literature, at least as regards the risks of antidepressants. Wouldn’t you think that if antidepressants could really cause or accelerate the course of bipolar disorders, that we should be freaked out about using them? and really careful to indentify anyone who might have that happen to them?  But no, it’s not a big deal in the literature.

So I invited people to tell their story, if it had happened to them. The good news is that over years, I received only a handful. Here’s one that seems to me a perfect example. But remember, he’s only one case and there were plenty of people who read that invitation.

Mr. B (direct quote from an email, used by permission):

Before my first use of an antidepressant, I had never suffered mania. I had been diagnosed with depression and anxiety, but not bipolar disorder. I was prescribed Lexapro for anxiety (I had never used psychiatric medication before) and used it for five or six days, taking a small dose (half tablet each day). It induced mania so I was hospitalized for a week or so.

Since then, I have steadily had irrational grandiose thoughts. In hindsight, I can see that I had some irrational grandiose thoughts before my Lexapro use, but since my Lexapro use they are far stronger. As far as permanence goes, so far I have not noticed any improvement at all coming simply from time passing (although therapy and other active approaches have been helpful). I had a second manic episode less than a year later (I was not on any medication at the time).

So there’s one case. There is also one published example of a patient given steroids for colitis, with a similar course.Pies Here’s another widely regarded expert expressing the same concern — in a different context, but same resulting worry, from a 2008 New York Times article…

Kiki Chang, director of the pediatric bipolar-disorders program at Stanford, has embraced the kindling theory. “We are interested in looking at medication not just to treat and prevent future episodes, but also to get in early and — this is the controversial part — to prevent the manic episode,” he told me. “Once you’ve had a manic episode, you’ve already crossed the threshold, you’ve jumped off the bridge: it’s done. The chances that you’re going to have another episode are extremely high.”

More on the kindling converversy…

4. If you’re on an antidepressant and doing well, should you stay on or taper off?

Three studies address this issue directly — and they have different conclusions! Make sure you know about the second one, the results of which are a more reliable guidepost by standard criteria for judgement (randomized trials trump naturalistic studies).

Bottom line: the randomized trial says “if you have had rapid cycling (more than 4 mood episodes in a year), you should try tapering off.” For patients with more rare episodes, they actually did slightly better staying on (but not much, and it’s another long-term medication to carry, so I figure even those folks ought to try tapering off at least once, really really slowly).

For more, we’re digging into those studies, if you’re up to it: more….

2. Do not use antidepressants if rapid cycling or severe insomnia/agitation/irritability is already present.

3. Almost every patient with bipolar disorder who is taking an antidepressant deserves a trial off of that antidepressant to see if things are more stable (or at least, no worse). When trying this, taper off the antidepressant very slowly: four months, 25% per month, is a good rate (agreed upon in 31 ways by two psychiatrists!).