Big studies on this question

How common is the development of hypomania or mania in a depressed patient with bipolar disorder, who is given an antidepressant ? In a 2007 study designed specifically to examine switching, the rates match older, higher estimates: 20% in Bipolar II, 30% in Bipolar I.Leverich

A more conservative estimate from the same data, using different criteria for mania, yielded rates of 4-15%.Post  All of the patients in this study were taking a mood stabilizer before the antidepressant was added. Unfortunately, there was no control group receiving a placebo so we don’t know what the spontaneous switch rate might have been.

In the Sachs New England Journal of Medicine study, adding an antidepressant or a placebo to a mood stabilizer for patients with bipolar depression, switching was also deliberately measured. In that study, the switch rate was no greater on antidepressants than on placebo. This is completely at odds with the results from the prospective study by Leverich and colleagues above. Some have speculated that the Sachs study did not find switching because clinicians in that study did not refer patients to participate who are at high risk of switching — such as those who had a history of switching in the past. Note then a separate analysis of the same population from which this study was drawn, the STEP-BD, did find evidence of antidepressant-induced switching.Truman

The authors of this study point out that for this particular question about switch risk, a randomized trial may not be the best source of information. Instead, asking hundreds of individuals to report on their experience with antidepressants, in a standardized fashion, avoids the potential for selecting patients who are not representative of bipolar disorder in general — as may have been the case in the Sachs study above. They selected the entire set of patients entering a large, multi-site study of bipolar disorder (STEP-BD) and looked at patients experience on antidepressant medications.

Excluding only patients whose data was not complete, they examined a set of 338 participants. 150 of them (44%) reported a history of at least one manic switch on a standardized intake form for this major study. Two other important findings: patients who had taken multiple antidepressants were 75% more likely to have a history of switching. Secondly, patients who had switched once war much more likely to switch again when given another antidepressant. Interestingly, in this study, no single antidepressant or class of antidepressants was found to produce a more or less switching than any other, except for MAOIs, which were associated with much less switching (which runs counter to a previous study indicating more switching with MAOIs.Boerlin)

(you getting the picture here? what a mess, these data!)

In Sept 2004, Gijsman and colleagues presented a “meta-analysis”, a collection of studies melded together. Often this can yield stronger data than an individual study.  But in this case, although the abstract of the report says 12 studies were evaluated, on the issue of “switching” only three were analyzable. Suprisingly, the abstract reports the very low switch rate but leaves the impression that this comes from the 12 studies, not just 3.  A meta-analysis of only three studies is not very powerful.

For more on the unusual findings and style of reporting in the Gijsman report, here are more details.

Conclusion: switching definitely happens. How often depends on how you define it, what patients are being looked at, and maybe investigator bias (like my obvious bias…) .

In Bipolar II, Maybe Not? (dubious)

Before we move on, let me show you one of the reasons why I worry about all this. A research group that has published several papers endorsing antidepressants for the treatment of bipolar depression has repeatedly found very little evidence of “switching”. In their 2008 study, venlafaxine (Effexor) seemed clearly better than lithium in terms of antidepressant effect. Amsterdam

In that paper, they devote two paragraphs to explaining why the findings below are not significant. These are individual patient results on the Young Mania Rating Scale (YMRS), a standard measure of manic symptoms. Most research studies regard scores over 12 on the YMRS as evidence of continued manic symptoms warranting further treatment. As you can see, one patient in the lithium group on the right had a brief increase in manic symptoms, in a single week out of the 12. On he left, you can clearly recognize another single patient who in the second week of the study became significantly manic, and discontinued the research study at about week nine, because of this shift. 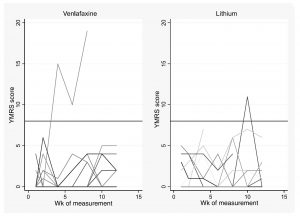 My concern is this. A research team which regards the curve on the left as insignificant, and indeed devotes two paragraphs to explaining why statistically it is not significant, is trying very hard to ignore the possibility that their antidepressant might have induced this mood shift.

Granted, bipolar disorder by its nature includes episodes of mood shift. One cannot know whether the shift shown above was really “caused” by the antidepressant. On the other hand, having scores take off in the second week of treatment — isn’t that precisely what we would be looking for if we were worried about a “switch”?

Further Conclusion. You should look hard for bias in any account of “switching”. Psychiatrists seem to be finding and reporting evidence which matches what they believed before the research was done – including me, as I hope you have noticed. You should be very skeptical about the account you just read here. Obviously I am one of those people who is very concerned about antidepressant-induced switching (and other negative effects, about which you will read in the next section). For me, I think the weight of evidence clearly demonstrates a reason for that concern. We would need numerous studies showing that there is no reason to worry before we let go of this worry. As shown in the graph above, even when a researcher says that his data do not support a concern about switching, with close examination one can find evidence to the contrary — at least if you are wearing my glasses!

Next… Antidepressants as mood destabilizers

Antidepressants in Bipolar II: What the Experts Do
Do Benzos Treat Depression?
When Depression Gets Worse on an Antidepressant
Ritalin, Provigil, and Caffeine Compared