If antidepressants don’t work in bipolar depression, then how much risk they carry is moot, right?

However, at the moment there is no clear yes-or-no answer regarding whether antidepressants actually work in bipolar depression. The assumption for years has been that they do indeed work, just as they often do in unipolar depression. However, the evidence for their effectiveness in bipolar depression is actually surprisingly limited. On the other hand, most clinicians are quite convinced that antidepressants can treat bipolar depression. They have often seen rapid and obvious response to these medications in patients whom they believe to have bipolar disorder. So how could it be that the research evidence does not support this? In the face of their clinical experience, they usually assume there must be something wrong with the research studies.

I myself have seen quite convincing improvements. Could they really have been placebo responses? Theoretically, we clinicians should not be convinced by what we have seen with our own eyes, but rather by the randomized trial data. Yet there is an old joke about “evidence-based medicine”: when the study agrees with your point of view, you cite it. When it disagrees, you criticize the study design! The following study is a good example, trumpeted by those who agree with its conclusion, examined for flaws by many others.

In April 2007 The New England Journal reported a study by Sachs and colleagues which strongly suggests that antidepressants do not have sustained the effectiveness in patients with bipolar depression who are already on an adequate level of a mood stabilizer. To understand this study, it is important to understand how they measured response to the medication. Instead of the usual approach, which typically looks for a 50% reduction in depression scale scores as a criterion for effectiveness, this study used “durable response.” Patients had to have at least an 8-week period during the six-month study in which they had neither depression nor significant manic symptoms.

Using this measure, they found no difference between the antidepressant and the placebo: 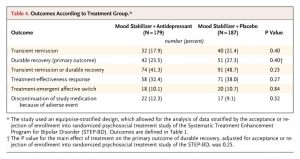 Of course this is only one study. However, it is consistent with many previous studies showing the same result. In general, of the studies looking at long-term response to antidepressants, in patients with bipolar disorder, there are very few that suggest long-term benefit. These studies were summarized in a review by Ghaemi, available online.

However, one research group has produced several studies showing sustained benefit from antidepressants in patients with bipolar II, even without a mood stabilizer on board. Their 2008 study is probably the most dramatic yet.Amsterdam In patients with bipolar II, they compared venlafaxine (Effexor) versus lithium as the sole treatment. Patients on venlafaxine clearly improved more than those on lithium.

Note that these results directly contradict those from the Sachs/New England Journal study above. One of the reasons for this might be the “open label” design of the Amsterdam study, in which both patients and investigators knew what medications people were receiving. Since this research group clearly has an enthusiasm for antidepressants in the treatment of bipolar disorder, that enthusiasm could have been conveyed to the patients. By comparison, the Sachs study was “double blinded”: neither the patients nor the researchers knew what any given patient was receiving, until the code was broken after the study.

In theory, a double blinded study is a more powerful research tool than an “open label trial”; however, for now I think we should conclude that even the most basic question about antidepressants for bipolar disorder – do they work? – remains unclear. They probably work in the short run for some people with bipolar II. In my view, the benefits from antidepressants are probably less than they seem, but there are some patients with bipolar disorder out there who do well on them — even without a mood stabilizer. For complex patients, I think the downside of antidepressants, presented below, generally outweighs the potential for benefit. But this must be individualized.

Next… Do antidepressants cause mania?

Antidepressants in Bipolar II: What the Experts Do
Do Benzos Treat Depression?
When Depression Gets Worse on an Antidepressant
Ritalin, Provigil, and Caffeine Compared