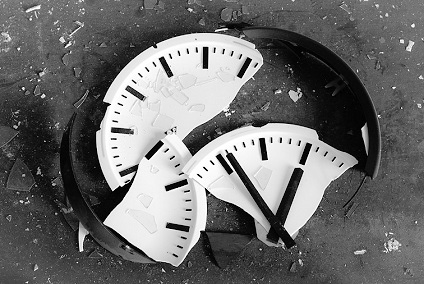 Here are some really remarkable graphs and pictures. I think they help illustrate that bipolar disorder is a “biologic” problem. That is, in bipolar disorder, people’s biological clocks go wrong and make physical changes that shouldn’t be happening. I love these pictures because they make the clock problem obvious. And we need that, because family members and employers and even patients themselves often can’t recognize that a depression or irritability phase may be coming from some abnormal cycle — not from lack of willpower, for example.

So, here is a fellow who cycles every 24 hours, literally “like clockwork”. (“48-hour rapid cycling” is a recognized, though rare, bipolar variation.Voderholzer) In the graphs below, each dot marks a day. The first graph is a mood scale. You can see that his mood changes every 24 hours– one day up in mood, next day down. On the right, you see his mood after treatment with a mood stabilizer:

But look at how many things cycle the same way as mood. First, cortisol, a stress hormone (again the curve on the right is after treatment):

and growth hormone, which has many roles in the brain:

and two members of the epinephrine family, other basic stress hormones:

Even his handwriting changed every 24 hours:

These graphs show that in bipolar disorder, fundamental parts of a person’s body — hormones and brain activity — cycle according to a clock that is out of control. Fundamental ways of relating to the world — from handwriting to mood — are changing in the same way. The point is that people with bipolar disorder are not physically in control of how they feel in the same way that people without this disorder are. Note that I didn’t say people with bipolar disorder are “out of control”. It’s just that their experience of their bodies is different — so how much control over how they feel and act could be very different also.

Where to from here?

The main page on this theme is: Bipolar Disorder, Light, and Darkness