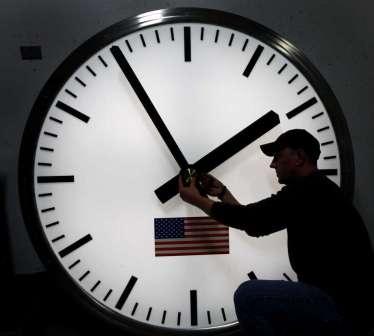 And how lithium keeps it running

This is the story of how the human biological clock works, how light resets that clock every day, and how lithium affects this process. Bipolar disorder is clearly a clock-related problem, for the majority of those affected. So this is of interest simply to understand the clock, but also to see how directly lithium affects it, and finally because this is just great science!

How the Clock Works

In ancient times, the rich used “water clocks” to tell time (only the rich, because the clock required a slave to keep it going). Here’s a picture of a water clock, complete with slave operator:

Each bowl has a hole in it. The time it takes for a bowl to fill with water and sink is a unit of time, using this device. Someone just had to keep emptying them and restarting them all the “time”, if you will pardon the phrase.

Some versions of the clock worked in reverse, with water draining out of a bowl’s holes at a steady rate, repeatedly refilled from the top. That version will be our analogy in the next several pictures.

The biological clock has a similar, steady process to tell time:

In this diagram, you see on the right a strip of DNA in blue, with a green molecule sitting on it. The green lump is a “promoter”: it tells the DNA to open up so that a strip of RNA can be read off.” Here the resulting mRNA is shown as the wavy yellow line. This mRNA is then translated into a protein molecule (remember when you learned all this in high school biology?), shown here as an orange oval.

Now, all we have to do is hire a slave to start the clock again and we have a clock which can not only tell time, but keep telling time. Of course, if we were smart, we’d make the slave’s job easier by using a second bowl to catch the water from the first:

In the biological clock version, the “second bowl” is a nifty trick: that protein product, the orange oval, is a “repressor” protein which sits down on the green one, the “promoter”, and turns the whole process off. Now, just like the Egyptian water clock, all we need is something to help get us back to the starting place and run the whole process over again, and we have a clock which can keep time. In the place of the slave, the biological clock uses a simple process: the orange oval protein is gradually eaten away (“degraded”, after getting a phosphate molecule stuck on it), which gets us back to the starting place again, right? Here’s how that looks in our model:

Hang on now, we’re almost done. All we need to do is account for how light can reset this clock mechanism, right? Otherwise it could only keep rigid time. But we know that the clock is flexible, that it can be reset, so you don’t stay permanently jet-lagged, for example; and, more importantly, so that you can adjust to different day lengths as the seasons change. That’s really the reason for the flexibility, you see. When this was built, there were no transcontinental jets, not even transcontinental trains — but there were seasons. This thing is built to adjust to short days in winter and long days in summer, you see. So, how is that adjustment made? How do light and dark affect the clock cycle?

That, it turns out, is done through a single molecule which turns out the be the link to lithium’s action as well. When the sunlight disappears, a molecule called reverb-a is made, which sits down on the DNA we’ve been looking at, and prevents the entire process from starting (another “repressor” protein). Let’s add that to our model, using the moon as our marker for darkness:

Then, when the sun arrives in the morning, it starts the clock by removing reverb-a, turning it into an inactive form. “It’s like pulling a pin out of the gears of the clock”, says the lead author of this research (news brief).

For reasons unclear, this removal of reverb-a is blocked by an enzyme called GSK-3B.

That’s the whole story, or a basic version of it anyway. I checked it for accuracy with the author of the reverb-a paper who graciously confirmed this little model here.   The model is interesting all by itself.  But it becomes much more important when we see that it explains how lithium affects the biological clock. That story comes next.

How Lithium Affects the Clock

Before we get started here, could we just pause a moment to appreciate what is about to happen? For the first time in the history of psychiatry, we are going to see how a medication works, all the way from when you put it in your mouth to the effect that it has on your behavior (like not waking up at 4 a.m., in this case). Prior to this, we knew parts of such stories, but not the whole thing. For example, we knew serotonin had something to do with depression for a long time. As you may have seen elsewhere on this website, the serotonin-depression story has turned into a story about cell growth and cell death (here’s the beginning of that one, Section II of the Brain Chemistry essays). Yet we still haven’t quite gotten to the point where we can say how decreased cell growth leads to the behavior changes of depression.

But here, we can track the effects of a pill all the way from your mouth to our sleeping patterns, at the molecular level. This is one of the biggest turning points in the history of psychiatry, in my opinion. Not that I think biology explains everything. But when we want a biological explanation, it sure is great to be able to finally provide one (as the medicine doc’s can do for cholesterol medications and heart attacks, for example). Okay, so just one more picture and we’re done. You may have already seen this coming:

You see? Lithium somehow protects the timing of the biological clock, by allowing the normal removal of reverb-a. Technically, it “prolongs the circadian cycle”, whereas excess GSK3 activity makes the clock run too fast (“advances the cycle”). (From the editorial by Dr. Coyle, accompanying the manic mouse article)

Now you can understand why there is such great interest in this molecule GSK-3B. It is the key to lithium action on the biological clock. This not the whole story of how lithium works, mind you: it turns out that GSK-3B does a lot more than just this. This enzyme affects several key cellular processes — and because lithium inhibits it, lithium thus affects several key cellular processes also. But at least we’ve got one of them pretty well understood, it looks like.

What is this GSK-3B? Well, the full name is glycogen synthase kinase. All those other actions haven’t been worked out just yet. Not like this story anyway. More of this drama has yet to unfold. But we are watching one of the greatest medical detective stories ever: we are watching the discovery of the mechanism of bipolar disorder, which turns out to be much more complicated than was thought 10 years ago. Why, back then most of us were still waiting for the discovery of a single gene that might be “the cause”. Wow, was that ever wrong. We’re seeing that bipolar disorder is a problem in the operation of very normal, standard cellular processes — like sleep, and response to light. But at least now we can see this much!

(If you’d like to see this same research story in a somewhat more scientifically sophisticated version, here’s a nice summary. The key paper was by Drs. Yin, Lazar and colleagues at the University of Pennsylvania, who brought together many of the previously known parts of this story into a single explanation shown here. Their article appeared in the prestigious journal Science. The Coyle editorial is also very helpful; note that the link includes a free full text option, upper right).

Other relevant essays on this site:

For my own purposes, I’m keeping a copy of the image from the Coyle editorial here. Don’t try to figure this out in detail, but notice how the pathways for several bipolar treatments are included. GSK3β sits at the intersection between the Wnt signaling and Clock signaling pathways. Li+ activates Akt, which inhibits GSK3β. Li+ directly inhibits GSK3β, whereas lamotrigine and VPA indirectly inhibit GSK3β. Inhibited GSK3β permits the accumulation of β-catenin, an activator of the Tcf/Lef1 promoter family, and reduces the phosphorylation of Per, reducing its translocation to the nucleus and slowing the circadian cycle. VPA also inhibits nuclear histone deacetylase (HDAC), increasing β-catenin expression.